For the version of this colony depicted in the Dynamite Comics, see: Aerilon (alternate).

Note: some of the information below is taken from Beyond Caprica: A Visitor's Pocket Guide to the Twelve Colonies

Aerilon is primarily an agricultural world, known as the "food basket" of the Twelve Colonies.
Despite this, Aerilon is considered to be one of the poorest Colonies (TRS: "Dirty Hands"). Its capital city is Gaoth.

Aerilon's government provides little or no support for health care, education, or other social infrastructure services. However, Aerilonians accept police with broad powers to detain, imprison, and torture suspects.

Although Aerilon's soil is not very fertile and requires intensive cultivation to achieve plentiful harvests, it is primarily an agricultural world. The capital, Gaoth, started as a prairie town on intersecting cattle trails. Aerilon also has tylium mines, and Promethea, one of the larger cities on the planet, was founded as a mining town on the edge of a region known as the Badlands (Blood and Chrome, deleted scenes).

While imprisoned on Galactica, Gaius Baltar talks extensively about Aerilon, confirming that it, not Caprica, was his birth world. He imitates the speech mannerisms of a stereotypical native, a farmer who likes to work with his hands, and "go down to the pub for a pint"[1] and have a fight at the end of the night. In doing this, Baltar puts on a strong raspy "Aerilon" accent [2] (TRS: "Dirty Hands").

Likewise, the musical and visual arts of Aerilon are informed by simple, harsh agrarian and working-class sensibilities.

Aerilon's prime educational institution, the University of Aerilon, is located in Gaoth. Promethea Agricultural and Mechanical (A&M) is based in the mining boomtown of Promethea (Blood and Chrome, deleted scenes). 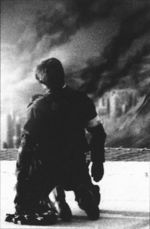 The only visual depiction of Aerilon.