Raptor 909, also known as Wild Weasel, is a sublight-only Raptor attached to the battlestar Galactica (BS 75) in the tenth year of the war. 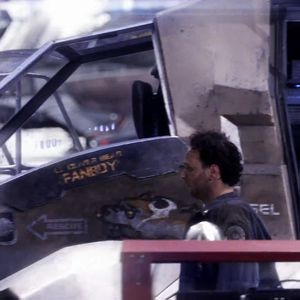 During the 10 year, Wild Weasel was crewed by Lt. Oliver Bead, and Jr. Lt. Coker Fasjovik. However, Lt. Bead is killed when the Weasel has a run in with Cylon forces. Jr. Lt. Fasjovik was in the process of cleaning up Bead's blood stains when his replacement, Ensign William Adama, who was "fresh off the boat", is assigned by the ship's CAG, Captain Armin Diaz.

Shortly after his assignment to Wild Weasel, Adama and co-pilot Fasjovik are ordered by Commander Silas Nash to escort Graystone Industries scientist Doctor Becca Kelly to the Scorpion Fleet Shipyards. En route, however, Kelly reveals new orders to rendezvous with the battlestar Archeron in Sector 12, near Cylon-controlled space. Upon arrival at the designated coordinates, Adama, Fasjovik and Kelly discover Archeron destroyed and are pursued by Cylon forces. They escape after leading the Raiders through the debris, and outwit them after Adama pilots the Weasel through the still active FTL drive.

With Archeron destroyed, Dr. Kelley orders the Raptor to break radio silence and make contact with an unknown source. Once a reply was received Adama was ordered to take the craft into Cylon held space, where a Colonial fleet was parked, hiding away. After a brief run in with the fleet's CAP, the Weasel is directed to contact the LSO aboard the battlestar Osiris (BS 54), and land. Soon after, Osiris is tasked by Colonial Admiralty with a combat jump to Djerba, in order to deliver Kelly to a Cylon comm relay where it is believed she is to upload a malicious command to the Cylon network. Two Viper pilots from battlestar Valkyrie (BS 41), Jim "Sunshine" Kirby and Zachary Elias, are tasked with escorting the Raptor to the surface.

Soon after launch, all three are followed down by Cylon Raiders and engaged. Elias is killed, and Kirby abandons the battle, leaving the Raptor crew alone. While Adama is successful once more in destroying their pursuers, the Raptor takes damage and is forced into a crash landing into a large glacier on the surface of the moon. Despite being in fixable condition, the Raptor was abandoned by the crew shortly afterwards (Blood and Chrome).