Jolly, along with Boomer, track the pirates back to a Fleet vessel called the Justice. The trail leads from the Justice to the Rising Star, where the plots of Sire Uri continue, despite the fact that Uri himself is in jail. The food shipments are being stolen to provide for the luxury of revelers led by Lady Magda Kocinik. The ring is busted, and the bad guys confined to the Justice which is left behind, crippled.

This being the last comic, several plot strands are wound up. With Adama's help, Shadrach has been able to use the information from Starbuck's old ship, the pattern of the seal of the 9th Lord of Kobol, and information found while Adama was in the Memory Machine, to plot a course to Earth. The location is distant, "beyond even our own galaxy" as Shadrach puts it.

Boxey is given a new robotic daggit, Jolly gets together with Medea, and now that all the vessels have been equipped with Star Drives, the Fleet jumps to hyperspace.

In the last panel, an unmarked buoy discovers the Justice drifting in space and relays the following message: "Squeee! Attention all Cylons!"

Although there are some inconsistencies, particularly in tone and characterization, the last issue of the comic might lead into the episode, "The Lost Warrior," which depicts the Fleet leaving Galactica's home galaxy for the first time (even though this is scientifically implausible). 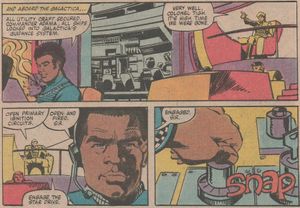 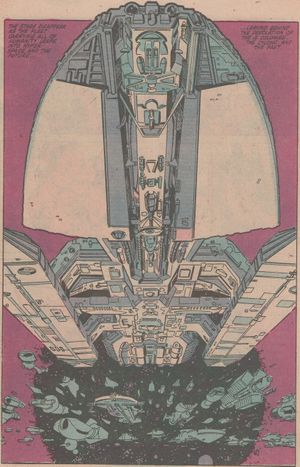 ...and the Colonial fleet jumps to Earth!