Parents: Get Your Heads Out of the Sand 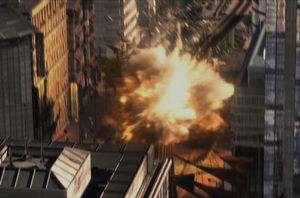 Parents: Get Your Heads Out of the Sand is a The Caprican Opinion article written by Ralston Sinclair. It was printed in Februarius 7, YR42.

Wow, it's been a great week, going through all of your hate mail and death threats and your pettiness. I love my job, and I love that I live on Caprica, where people can say whatever they want and write whatever they want, on the condition that any fool in a dirty shirt can poke it with a stick and tell me I'm actually wrong - and not only am I wrong, that I should frakkin' die for being wrong. Yes, I greet every morning with a smile as big as the charred, twisted gap in the MAGLEV line.

Yes, I said just a couple of weeks ago that monotheism was a passing fad, and nothing more. A fad that sure as hell doesn't breed any damn terrorists. And now you're all telling me that I was wrong, 'cause some monotheist terrorists blew up a train.

Here's the thing: I don't give a frak if they were monotheists or not. Rumor says 'twas was a bunch of kids that set off that explosion, high school students, and I believe it. And monotheists or not, when you put a bomb on a train and blow yourself and hundreds of people to the bright blue yonder, that's a sign of only one thing: Deep, deep mental and emotional distress, of frakkin' sociopathic proportions. And who/what's to be blamed for that in a kid?

That's right. Parents, I'm looking at you, again. Your kids blew up a train, and don't you dare blame the "One true God that will drive out the many," or whatever these STO clowns say. They're kids. They're your responsibility.

So stop wasting your lives in your stupid offices and gyms and power lunches and whatever the frak else you do and start being Mom and Dad, before something even bigger goes boom.

I await your hatred.