Missile batteries are weapon emplacements aboard Cylon and Colonial military ships capable of firing conventional or nuclear ship to ship, or ship to ground ordnance. They are protected against damage by retraction mechanisms on Cylon craft, and by external hatches on Colonial craft, and vary in size depending on the class of ship. 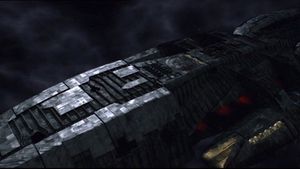 The launch tube doors are opened on the battlestar Galactica (BS 75).

On Colonial craft, missiles are not the first line of defense or offense when in battle. Instead, Colonials prefer to use large gun batteries, however, Colonial military craft are prepared to utilize missile delivery systems, usually as a last line of defense against an aggressor. Missiles are prepped for use by moving the missiles into an upright launching position. Once the missiles are loaded into the tubes and are ready to be fired, they must be armed with a target package and a point of aim. This is typically ordered by the vessel's Commanding Officer, with the order being relayed by the Tactical Officer (TRS: "Rapture"). 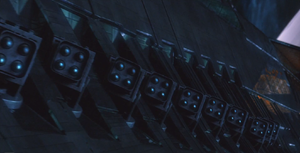 Despite many fail safes, missile tubes can take damage that can jam the tubes, and prevent a missile launch. If need be, Colonial commanders can receive manual control over the missiles in the tubes, and detonate them from the ship's CIC, in a kamikaze run against enemy targets ("Blood & Chrome").

Smaller ships in the Colonial Fleet, such as the Orion class battlestar, Valkyrie type battlestar, and even the Colonial Raptors also have smaller, defensive ship to ship missile batteries, designed to strike down smaller craft, such as the Cylon Raider, before switching over to the larger, more effective main batteries ("Blood & Chrome", TRS: "Hero", "He That Believeth In Me"). 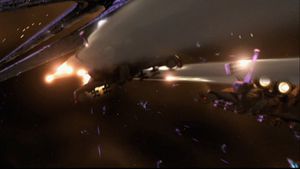 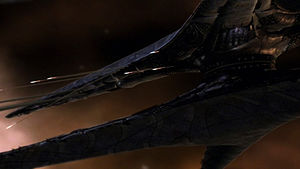 Missile launch systems are the primary weapon of the Cylon fleet. They have been utilized on Cylon craft dating all the way back to the First Cylon War, and are still utilized by the Cylons after the Fall of the Twelve Colonies. Despite being vulnerable to electronic countermeasures, Cylon based missile systems have proven to be quite powerful, and destructive.

During the First Cylon War, the Cylons used missiles that were able to penetrate the armor on Colonial ships, which were able to deliver a great deal of damage. These missiles were also deployed on ground-based war machines throughout Cylon war zones ("Blood & Chrome", "Razor"). 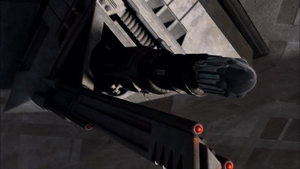 A Cylon basestar prepares to fire a missile with attached MIRV payload.

As part of their ship to ground systems, the Cylons utilize a Multiple Independently targetable Reentry Vehicle (MIRV) payload, delivered from basestars in orbit, to attack the Twelve Colonies with nuclear warheads, which resulted in the total destruction of the Colonies ("The Plan"). These basestars then switched over to conventional ordnance to attack and destroy the disabled Colonial Fleet (TRS: "Miniseries"). Following the Fall, a common Cylon tactic is to surprise a Colonial crew by quickly launching a nuclear salvo before deploying Raiders and switching to non nuclear ordnance (TRS: "The Captain's Hand").

Smaller Cylon craft, such as the Raider, also carry nuclear and conventional missile launch systems, however, they generally rely on their automatic cannons for offensive and defensive purposes. Despite their small size, missiles delivered from Cylon Raiders are capable of inflicting great damage to Colonial craft if they are able to get in close enough (TRS: "Miniseries", "Razor", "Daybreak, Part II"). 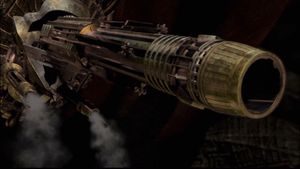 A missile cannon on the Colony prepares to strike a target.

Specialized missile batteries are placed on the Cylon Colony to defend against any aggressors. These missile cannons retract from the hull, upon detection of an enemy combatant, and work to overwhelm enemy targets with multiple shots per second in a concentrated kill zone (TRS: "Daybreak, Part II").