This page covers the resistance movement on Caprica. For other meanings of the word "Resistance", see Resistance. 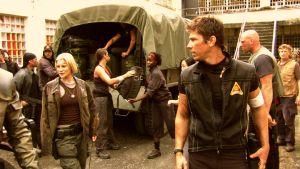 Kara Thrace with Samuel Anders at the home base of the Caprica Resistance following the Arrow of Apollo's recovery (TRS: "Resistance").

The Caprica Resistance is a loose organization of survivors of the Cylon holocaust on Caprica working to actively oppose the occupying Cylon forces.

The resistance cell is led by Samuel Anders, a former professional Pyramid player. Anders and several other members of his team, the Caprica Buccaneers, were in the high mountains well outside the city at the time of the Cylon attack. After the initial attack they form a resistance movement centered around their pyramid team, supplemented by hikers and other survivalists who also survive the Cylon nuclear bombardment.

To survive, the cell raids a military stores for munitions and other supplies, including anti-radiation medication. They conduct guerrilla attacks against the Cylons in an attempt to keep the enemy forces off balance and in the vain hope of forcing the Cylons to leave (TRS: "Resistance", "The Plan").

The resistance, numbering 53 people when Kara Thrace arrives at the base with Karl Agathon some 53 days after the attack, is located at Delphi Union High School just outside the city of Delphi (TRS: "Resistance").

The resistance leads an assault against a Cylon-operated farm where Kara Thrace and Sue-Shaun are incarcerated. Thrace escapes on her own power, but finds Sue-Shaun already connected to the Cylon devices intended to harvest her ovums or impregnate her. Thrace mercy-kills Sue-Shaun on her request.

As Thrace leaves the building, she encounters another copy of Simon, having killed a copy moments before. The resistance team eliminate this copy quickly, but are soon pinned down by Centurion gunfire before renegade Cylon "Caprica Valerii" obliterates the Cylons from a stolen Heavy Raider and evacuates the humans from the area. 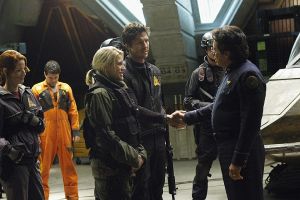 Anders hides the Arrow of Apollo on the high school grounds and returns it to her before she, Valerii, and Agathon escape the planet and return to Laura Roslin and her faction above Kobol almost two weeks later (TRS: "The Farm").

The resistance finds its numbers heavily weakened after a Cylon attack, months after Thrace leaves their party. Fortunately, a massive Search-and-Rescue effort, led by Thrace, returns to find Anders and the remnants of his team. After the group's ambush by Cylon forces (who have left for good, according to the copy of Cavil), Anders' resistance team boards the SAR Raptors and leave Caprica for the Fleet (TRS: "Lay Down Your Burdens, Part II").

A copy of Cavil infiltrated the resistance but was executed by being blown out Galactica's airlock with another copy of himself when his true nature was discovered. Unknown to the resistance, his time among them caused him to change his perspective and mind about humanity, coming to believe that what the Cylons did was wrong. As a result of this, he was presumably boxed once he resurrected (TRS: "Lay Down Your Burdens, Part II", "No Exit", "The Plan").

The resistance is also unaware that their doctor, Simon, is a Cylon agent until they rescue Thrace from a Cylon Farm. The resistance members kill a Simon outside the farm and seeing his corpse causes them to realize that their doctor is a Cylon and Jean Barolay is sent back to execute him. A deleted scene reveals that the Simon was killed, but not before he contaminated their anti-radiation meds (TRS: "The Plan").

In an ironic twist, the resistance's leader is himself later unveiled as one of the Final Five (TRS: "Crossroads, Part II").