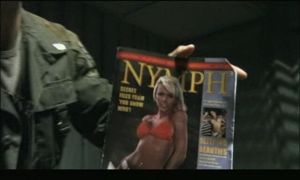 The term "nymph" is used in two contexts in the Re-imagined Series.

The first use is in the name of an old Colonial adult entertainment magazine containing scantily-clad, yet tasteful, photos of women. A pilot, Reilly, possesses one, and when he is killed this copy passes down to Hot Dog (TRS: "Scar").

Either this magazine, or another copy of the same issue, is later in the possession of Eammon Pike on the Demetrius (TRS: "The Ties That Bind").

Laura Roslin uses the term as well as a perjorative (comparable to the use of the term "slut") in accusing Tory Foster of colluding with Gaius Baltar and his "nymph squad" (TRS: "Faith").