A New Crew in Town 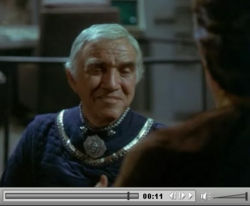 No one really believes that.

"A New Crew in Town" is a humorous music video appearing on Syfy.com comparing the Original Series with the Re-imagined Series. The song was written and performed and the video edited by composer/producer Dave Doré. It sets the following lyrics to fitting clips from both shows.

Let me tell you about my favorite ship.
Back in '78 it seemed pretty hip.
Wasn't the Millennium Falcon or the Enterprise.
It was the battlestar Galactica that took that prize.


Sure back then, the effects were kind of cheesy,
but I loved it like George Jefferson loved his Weezie.
It didn't worry about gravity or anything inertial,
and Apollo's hair looked like a shampoo commercial.


But there is a new crew in town,
they know how to throw it down.
They make the others look like a ship full of clowns.


You are my new battlestar, and you've come so far.
I love the slanted walls and your A-shaped halls.
You are full of Cylon clones,
and those old-fashioned phones.
You're a frakkin' awesome machine,


so much better than the one with Lorne Greene.

They had a daggit and a boy named Boxey.
Now Starbuck's a girl and the Cylons are foxy.
For Adama, Eddie Olmos wins the fashion election.
Instead of padded robes he chose a different direction.
Sorry Dirk Benedict, I don't want you to lose face,
but I'd rather share my space with Kara Thrace.


Baltar still gushes with evil intent,
but why is he the only one with an English accent?
I love hot Number Six and her identical twins,
because on cable they are able to show a lot more skin.


You are my new battlestar, and you've come so far.
I love your blueish glow and your drunk XO.
I love that you brought back old Richard Hatch.
You're a frakkin' awesome machine,
so much better than the one with Lorne Greene.