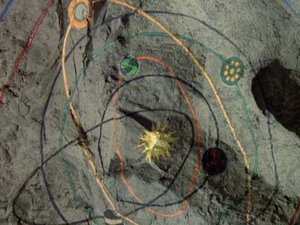 The map of a solar system that is on the wall in Starbuck's cell.

The Silent One is the appropriate nickname of a prisoner that was found drifting in space in a space craft that met with disaster. Apparently a male by the sound of things, the "Silent One" drew objects (in particular a map of a solar system) that confounded the intoxicated prisoners on penal planetoid Proteus. When Starbuck comments on Boxey's drawing, saying that a planet was off an orbit, Robber remarks about the Silent One and his drawings in the cell that Starbuck -- a.k.a. Bootlegger 137 -- was thrown in for the duration of his stay (TOS: "The Long Patrol").