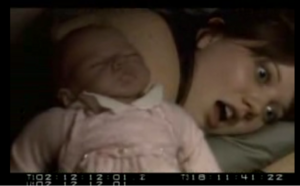 "Here, Cally, and take your demon child with you!"

The producers of the Re-imagined Series released a gag reel of humorous outtakes and gag scenes from production of Season 3.

The 13-minute video has not been commercially released, but can be found on various video sharing websites.

Among the humorous tidbits are:

The clip ends with a message congratulating the cast and crew to a "kickass season 3" and a BSG themed rap song.

So far the Season 3 gag reel is the only one to be widely disseminated. Other bloopers have been shown at conventions and low-quality clips taken from the audience have appeared on the Net.

Also widely circulated is a series of outtakes by the cast during recording sessions for various Sci Fi Channel promos during Season 1, during which most have difficulty saying the name of their series, although James Callis tries to save his take by changing the name of the series to Baltarstar Galactica.