Seal of the Lords 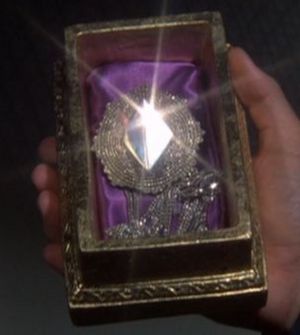 Adama shows Tigh his medallion while explaining his reasoning for entering the magnetic void (TOS: "Lost Planet of the Gods, Part II").

The Seal of the Lords is a medallion that is the symbol of the Lords of Kobol. Commander Adama normally wears this peculiar medallion with his commander's robes when in full dress.

He explains to Colonel Tigh that the medallion is a symbol of the Colonial faith as well as a symbol of power. The medallions are passed to members of the Quorum of Twelve; both he and the treasonous Lord Baltar have the last known surviving Seals.

The medallion is also used in the sealing ceremony, where the master of ceremonies wraps the medallion's chains around the bride and groom's hands as each holds the other's hands, with the medallion itself on top.

On Kobol, in search of answers to the whereabouts of Earth, Commander Adama uses the medallion as a key that opens the tomb of the Ninth Lord of Kobol, as well as to circumvent the cage-trap in the corridor leading to the tomb. The diamond-shape of the medallion also served as a mirror to reflect light to photo-sensitive eyes of the animal-figures within the tomb, thus opening the actual resting place beneath the faux sarcophagus (TOS: "Lost Planet of the Gods, Part II").