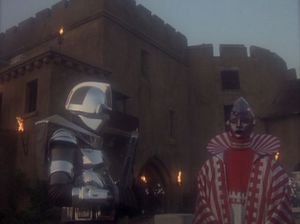 Specter and a Centurion living the castle life.

Megan's castle is located either near or inside the Naga forest on Attila. Like any self-respecting castle, it is surrounded by a moat and is accessible by only one bridge.

After the Cylons began their devistating attack on the planet, Megan and his surviving children are apparently forced to flee the castle, after holding out "longer than any of the others" during Specter's invasion of Attila. As Kyle later tells Starbuck, he and his father fought rearguard action into the main hall while Miri and Megan's youngest children (Nilz, Robus, Ariadne) escaped through a secret passage in the main hall.

The Cylons turn the castle into their primary command post, where they established petro dumps (which are later moved inside the castle itself due to the children's attacks) and used the already established structures to their advantage. During a reconnaissance mission, Kyle discovers that the Cylons have turned the main hall into a command post, which always contains Centurions numbering between "two or three score".

Megan is later captured by the Cylons and locked up in a prison, located in one of the castle's towers.

After enlisting Starbuck's help, Megan's children free their father and retake the castle, resulting in Specter and the Cylons' retreat from the planet via a ship on a nearby yet unseen launch field (TOS: "The Young Lords").