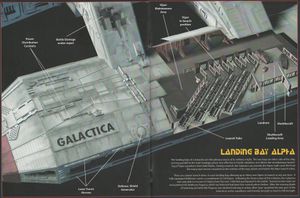 The launch bay is a place from where a Colonial battlestar launches its Vipers and other spacecraft.

Battlestars have two launch bays enclosed within two quasi-cylindrical nacelles located port and starboard of the ship. One of the bays is known as "launch bay alpha" (TOS: "Lost Planet of the Gods, Part I"). The launch bays are directly adjacent to 16 launch tubes each, which are slanted towards the battlestar's aft. Designed solely for Viper craft, each of the sixteen launch tubes has a track in the launch bay where the Viper sits. An elevator provides access to the launch bay ("Saga of a Star World", "Lost Planet of the Gods, Part I"). In addition, a rapid transport trolley permits fast transportation from the pilots' quarters to the launch tubes when the ship goes on red alert (TOS: "Saga of a Star World").

Along with the bachelor officer's quarters, the launch bay (incorrectly referred to as the "ready-room") is "bathed in red light so that the pilot's eyes will be ready for the darkness of space" during a red alert.[1]