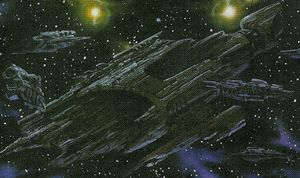 The derelict mothership is a ship of unknown origin encountered by Galactica.

It is detected around the same time Commander Adama experiences his nightmare, which consists of the entire Fleet being destroyed by an unknown cosmic storm.

The mothership herself is surrounded by seven freighter-sized space craft, themselves derelicts, and is twenty-times the size of Galactica.

An expedition lead by Captain Apollo is sent to investigate the mothership. While onboard, Lieutenant Starbuck experiences a vision where one of the carcasses turns into Apollo and tells him that he must have Starbuck's soul. Doctor Wilker is separated from the expedition, himself attacked (Prison of Souls, Part 1) and possessed by a Somnian (Prison of Souls, Part 2).