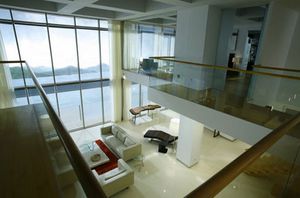 Caprica's Finest: The Graystones is a The Caprican Lifestyle article written by Laurel Hill. It was printed in Ianuarius 12, YR42.

Beauty, success and a loving family. It appears that Caprica City's own Graystone clan have it all - and they do. The Caprican takes a peek behind the curtain and scopes out the lives of one of the planet's - nay, the Colonies' - most influential families.

Of course, when it comes to progressive, everything starts with the Graystones, themselves. Everyone knows Daniel Graystone, founder and CEO of Graystone Industries and pretty much THE name in the technology sector. But his wife, Amanda, is no slouch, a brilliant surgeon and partner in Daniel's social efforts. The couple's daughter, Zoe, attends the prestigious Athena Academy and while we'd never stoop to rumor and innuendo (who, us?), let's just say that we've heard her hard-partying ways are bound to land her on the gossip pages some day, where gaggles of Caprican girls will eat up her every escapade.

The Graystone home is also an architectural wonder; a multi-level palace comfortably nestled just outside of Caprica City with views that only a billionaire could afford. With its modern, yet tasteful decor, it's the envy of every up-and-coming business mogul this side of the Alpha Quadrant. But don't let its clean look fool you, because this place is wired to the hilt, as you'd expect from the home of the man who's pioneering artificial intelligence research. We're not saying Daniel Graystone's a geek, but we have seen his tennis court, and yes, it has line sensors and auto-umpire functionality.

But it's not all opulence with the Graystones. They're pillars of the Caprican community, as well. Daniel, a well-documented Pyramid fanatic, owns his own CPL franchise, everyone's favorite C-Bucs. The Graystones are also big philanthropists, donating large sums of money to Apollo University and Caprica General Hospital.

We'll stop before you really start feeling insignificant, but expect to see plenty more of the Graystones and their high-profile lifestyle in the coming year.