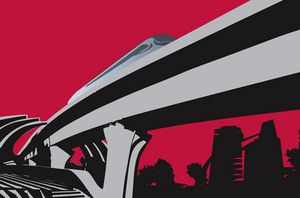 An illustration of a MAGLEV.

Fares Rise and Commuter Morale Declines is a The Caprican News article written by Laurel Hill. It was printed in Ianuarius 12, YR42.

Much to the dismay of commuters, MAGLEV announced that the Minister of Transportation has approved another fare increase. The increase will be the second in five years and is projected to cost Capricans an estimated 144 million cubits annually.

"I don't know what in the gods' name they're thinking!" said Daphne Waters, a MAGLEV commuter. "Cubits don't grow on trees."

More reactions after the jump.

Protesters swarmed outside of MAGLEV headquarters, and some citizens have threatened to boycott the trains in hopes of halting the fare hike. But despite feelings of disapproval, MAGLEV officials are adamant about their plans for rate changes.

"Great measures were taken to develop a cost effective budget that we feel accommodates commuters and also successfully addresses Caprica's economic demands," said Jerry Cormack, Chief Financial Officer for MAGLEV. "Therefore no amendments will be made to our approved proposal, and we plan to move forward as planned."

Rate changes are scheduled to take effect on Februarius 1, YR42.