A battlestar is a Colonial capital warship that combines the roles of a space fighter carrier and battleship. Battlestars are the adversarial counterpart to the Cylon basestar.

Battlestars have differing appearances and abilities in both the the Original Series and Re-imagined Series.

For information on the battlestar Galactica itself:

Note: There may be duplication from the preceding list. However, the links below are to alternate articles to reflect the Separate Continuity nature of these craft, e.g. Galactica. 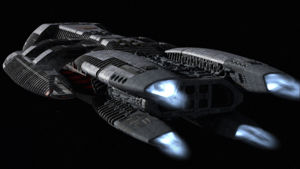 For more on what constitutes an official source, see Battlestar Wiki:Citation Jihad.