Those pages had a better visual impact when the episode info box and screen cap were aligned to the right of the page, opposite the contenets box. It now looks awkward and uncoventional and a little amateurish. The original format was superior. If anybody agrees could it be changed back? I wouldn't know how to so I'll leave that to someone else! :-) Jxh487 10:11, 21 August 2006 (CDT)Jxh487

It was more intuitive when the search bar was below the Navigation panel, as this means you don't have to scroll down to quick search. The first characters of the headers on the panels for Projects and Community, respectively, are not capitalised. Headers should always be capitalised. Also the links bar on the left seems narrower than before, it looks squahed and clunky, the BSG logos before each header could do with a black blackgrnd, and my final nitpick is that these logos push the headers out of their centering, so perhaps a left-handed alignment would tidy it up! -) I'm sorry that I'm moaning rather than actively rectifying these faults, it's just that I havent a clue as to how to change things! Thanks, James. Jxh487 16:34, 21 August 2006 (CDT)jxh487

To sum up the ideas.. move the "search" below the Navigation "box". What links? Are we talking "In other languages"? Some links are just long and they are stuck in those sizes of boxs. The boxes will never resize. I am sure about the little icons. The icons seems to be fine for me without a black background. Are you using I.E. or FireFox or Other? The "upper" case I will get someone to fix. I noticed that also. :) --Shane (T - C - E) 16:39, 21 August 2006 (CDT)

I'm using the black background and all the icons have a really ugly blue background behind them. Maybe a transparent background? --Talos 20:24, 21 August 2006 (CDT) 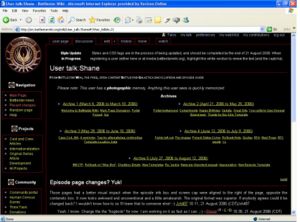 yeah. It's just a skin problem. That skin, what I am calling "bsgorginial" (since it was the first skin on here) I am still coding so those images won't show up. It would show just like it did before. Right now the style sheet that is upload will do that. I suggest switching templates until I can finsh the skin and send them to Joe for an update. --Shane (T - C - E) 22:12, 21 August 2006 (CDT)

Shane, i'm using the bsgbook and noticed that the background for the "new message" box has this yellow-orange background to it. The class is "usermessage". -- Joe Beaudoin So say we all - Donate 22:03, 22 August 2006 (CDT)

Big cheating here but it works. Right click save as etc, do your business lol.

Wow. I don't know how you whizzes do it, but that was amazing what you did with my edit counts and the move. I just really wanted to thank you for that. I n fact, this thanks is so big it didn't seem right to put it on my talk page. I just wanted to thank you A LOT for taking time out of your busy schedule to help me. I realized that you taking the time to do the move must have delayed the Style Update (which is STELLAR, if I do say so myself. Its really given good ol' BSWiki a look all its own and I'm lovin' it) and I wanted to thank you for allowing some time to help me. I feel that you should be recognized, so as a reward I've sent you this police video clip. It's yours to enjoy, so watch it and reap the rewards of helping another user. Cheers! (and no, that is not a new account. That's just me giving my username a spruce up) -- Homeworld - To the Impossible.

Horizontal rules seem to run under boxes, e.g. on Kara Thrace and my userpage. This is only perceptible with the BsgMonoBook theme, as rules and the backgrounds of the boxes are the same color in BsgBook. I suppose the background on BsgMonoBook has been omitted or made transparent. --CalculatinAvatar(C-T) 23:09, 23 August 2006 (CDT)