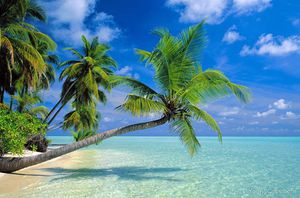 "Enter The 'Seven Days Off World' Sweepstakes For Your Chance to Win Seven Days Vacation on Any of the Twelve Colonies. Colonial Express Will Send One Lucky Family Off World For One Week, All Expenses Paid."

Travel Agency Gets More Than It Bargained For After Group Marriage Wins Sweepstakes is a The Caprican Lifestyle article written by Caleb Barlow. It was printed in Februarius 23, YR42.

Chances are you know about the recent sweepstakes hosted by popular Caprica travel agency Colonial Express. You know, the one that promised to send the winner to any of the Twelve Colonies for one week, all expenses paid - travel, lodging, food, entertainment, you name it. The exact phrasing of the contest was as follows: "Enter The 'Seven Days Off World' Sweepstakes For Your Chance to Win Seven Days Vacation on Any of the Twelve Colonies. Colonial Express Will Send One Lucky Family Off World For One Week, All Expenses Paid."

Well, Colonial Express will probably never use a term as vague as "Family" ever again. Because it isn't a lucky young couple that's going to live it up for a week, or even a family of four, as the travel agency was probably hoping.

The winner of the 'Seven Days Off World' Sweepstakes is the Mayburys of Caprica City, a group marriage consisting of seven wives, five husbands and nine children (ages 3 to 15). Oh, and a golden retriever named Buckingham.

"Honestly, the 'Seven Days' Sweepstakes doesn't quite have the budget to cover the travel expenses of 21 people," said Colonial Express CEO Mark Standriff on the day the winners were announced. "But we're legally bound by the language and the rules of the contest, so we'll stay true to our word. We wish the Mayburys a safe and happy journey!" Standriff resigned from his position the following morning.

The Mayburys will be spending a week on Picon - and yes, Buckingham will be joining them, too. "We've heard about the amazing summers on Picon," says Keira Maybury, 25, one of the seven Maybury wives. "We never thought we'd ever be able to afford all of us going together, but now's our chance!"

The legal team of Colonial Express is currently reworking the terminology of any future sweepstakes.