The designation Battlestar Group 75 would have no more relation to the hull number of a BattleStar then that if US Navy ship to the Task Force number it was assigned to. Example Task Force 38 (WW-II) was the same ships as Task Force 58, all that changed was which Admiral was in charge. Similar statements can be made for AirGroups.

"Curiously, Aaron Doral states that Galactica was one of the original 12 Battlestars built during the early days of the Cylon War, which makes this designation number curiously high."

Um...not really. For example, the first airborne unit in the US Army was the 82nd Airborne Division - it doesn't mean that there were 81 airborne diivsions before it, it meant that it was the 82nd division of the Army, and that it was designed to operate airborne. The 75th Battlestar Group might have been the 75th group in the Colonial Fleet, but the first one to have battlestars in it. And there's no reason that the Galactica couldn't have been shuffled around to other, or newer, Fleet units, especially given what we know happened after the end of the war. Someone should change this articvle to reflect that. Kuralyov 15:23, 23 September 2005 (EDT)

I have it on tape but I cannot tell; the crest is on screen so it is "canonical" but it's too fuzzy to see. I've only got it on regular tape so I can't DVD zoom or anything. Maybe it's displayed on their flight deck: I noticed that "BSG-75" is emblazoned on the flight deck of Galactica (look when Raptors land). However, I don't know if we have a shot of someone landing on Pegasus. A good question for RDM's blog? ---Ricimer, 24 Sept, 2005

Do we know for certain that it HAS to be an acronym? US battleships were given the prefix BB - obviously not battleship. Carriers are CV - C for carrier, V for "heavier than air aircraft" obviously not an acronym. Perhaps Battlestar is a class and BSG stands for something else. It could also be certianly used to explain the number sequencing too - ie Galactica being number 12 of the original Battlestars, but having the number 75.

Actually, those hull numbers are classification. For the base type of a hull, its just the first letter repeated (hence, BB for Battleship, DD for Destroyer, etc.) Roles of the basic class are indicated by changing the second letter. Futher variants are described by adding a third letter. In the case of aircraft carriers, the ship's primary classification is Cruiser, giving it a base classification of CC, however, aircraft carriers are special-purpose cruisers. In their case, the word chosen to describe their role was Aviation, for obvious reasons. Unfortunately, in the early 20th century when this schema was enacted, CA was already taken by Cruiser - Armoured, or heavily armored cruisers, so the Navy used the second letter, V, as the type designator for the aircraft carrier classification, yielding the now-familiar CV (and later, CVE, CVA, CVN, etc.) If we were to assume that BSG is a hull classification as opposed to a taskforce number, using the US Navy naming convention (other countries and planets actual mileage may vary), it would translate to Battleship (B) Scout (S) Guided Missile (G), or a Battleship built for a scouting role armed with Guided Missiles. Obviously that doesn't describe Galactica by any stretch of the imagination, so either 1) BSG is in fact a taskforce number, 2) BSG-75 is Galactica's hull number using some hitherto unknown scheme (like Star Trek's NCC/NAR/NX system), or 3) it has some other meaning not covered here. --Bronzite 16:29, 21 December 2005 (EDT)

It has been confirmed that "BSG" stands for "BattleStar Group". The crest of Galactica says "BSG-75" and in episode #2, "Water", we see a chart that has a schematic of the ship on it, and on this chart is written out "Battlestar Group 75". Mind you, we don't know how the NUMBERING system works; i.e. there were 120 Battlestars before the attack, so who knows how many were in a "group" (i.e. is there a group "79" or are there 7 main branches under different admirals, and WITHIN these oversector groups we then have individual grouaps, 1 through 5? (thus the seventh admiral commands 5 groups?)--->This is baseless speculation. I'm just saying that we DO know what "BSG" stands for, but we have no idea how the number corresponds. --Ricimer 16:55, 21 December 2005 (EST)

Well, the nameplate on the outside of Galactica is marked "BS-75", likewise the Pegasus is "BS-63" as seen (difficultly) in this picture. It could be an arbitrary number like US Navy taskforce numbers from WWII like TF 58. Of course the Pegasus could be the second battlestar of the name, keeping the number of the older, Galactica-like ship, thus explaining the lower number. --Talos 21:27, 21 December 2005 (EST)

Got a better pic, the first was that one I uploaded of the Peggie. Also, maybe the group number is based on the command ship, so a group commanded by the Galactica would be BSG-75 after the BS-75. --Talos 21:36, 21 December 2005 (EST) 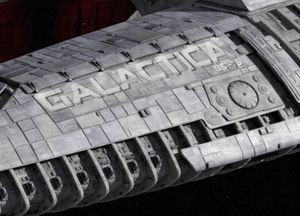 The Battlestar Group number could also be related to how the US Navy named battlegroups in World War 2. The examples of Task Force 38 and Task Force 58 essentially mean that those were respectively the 8th task force of Third and Fifth Fleets. Decimals would also be added to further denote smaller groups or individual ships as a part of the whole. An example of this is that, since Task Force 38 had as many as seventeen aircraft carriers, it wasn't a common occurrence for all seventeen to be focused on attacking the same fleet or island. Task Force 38.3, for example, would only contain several carriers and would be far more practical to use against a target. Task Forces didn't always have carriers, either. For example: Task Force 34-the 4th TF of the 3rd Fleet-solely consisted of battleships, cruisers and destroyers. If these are similar to Battlestar Groups then, Galactica could conceivably be part of the 5th Battlestar Group of the 7th Fleet.Newbe83 22:36, 1 July 2009 (UTC)

Welcome Newbe83. While the numbers, to our knowledge, are arbitrary, your speculation has greater ground than others, I think. I don't know where or how we can verify anything to support the idea, sadly. --Spencerian 02:59, 2 July 2009 (UTC)

Why note move this page to BSG and have BSG-75 and whatever number the Pegasus ends up being both redirect there? There's not much to say about either group in particular, so much as the BSG as a concept and which ones are known. --April Arcus 19:45, 26 September 2005 (EDT)

This was contentious for some time, since the screenshots are really quite blurry, but this image posted by Talos on Talk:Pegasus (RDM) resolved the matter to my satisfaction: I understand that, but maybe, after Cain died and Adama ascended to Admiralship, Pegasus was incorporated into BSG 75. It's only a theory, of course, and I'm probably wrong, but, it could be right. --BklynBruzer 03:38, 29 August 2007 (CDT)

Occam's razor says that someone simply made an error. They probably had a better source image of the Galactica logo and only updated the name (also note that the font is different), but neglected the number. To be honest, while it's noticeable as fan, it isn't that obvious. --Serenity 04:41, 29 August 2007 (CDT)

As the flight decks of the battlestar PEGASUS (as well as on the nameplate) bore the '62' designator, this - if one takes the US Naval practice into consideration - makes it a SHIP designator. Also, in some episodes, you see the battlestar designated solely by its number on the DRADIS screen. True, the GALACTICA is an older ship than PEGASUS, yet PEGASUS' number designator is lower than the GALACTICA. As the U.S. Navy does change numbers around from time to time, it is not impossible that "BSG" was a new designator for battlestars, and that when the renumbering took place, the newer ships got the lower numbers, hence PEGASUS having 62, instead of 75. -Expatkiwi20:26, 26 December 2007 (PST)

It can apparently be both. We know that Galactica definitely belongs to BSG 75 from the chart on the podium in "Water" (that's where the "battlestar group" thing comes from in the first place). So extending that to Pegasus makes sense. Cain is also an admiral, who could command a small fleet. Some people do indeed confuse that and tried to extend the group number of Valkyrie to the ship as well, but that was corrected. --Serenity 10:05, 27 December 2007 (CST)

Well the thing is this. In "Razor" the patch on young William Adama's flight suit still reads BSG 75, which throws a serious wrench into the whole renumbering thing (which I hate because I thought the same thing you did for some time). I don't like it, because it doesn't make sense, but that's what's on screen. Keeping in mind Aaron Doral's statement from the Miniseries which tells us that Galactica was one of twelve original battlestars assigned to protect each of the colonies, I submit that it's remotely possible that Galactica was renumbered if more battlestars were built towards the end of the Cylon War, much like the dramatic buildup of the US Navy towards the end of World War II. However, for one, his statement seems to suggest that there were only twelve battlestars in the entire War. Two, it still makes no sense even then to renumber Galactica, and three, the truth of the matter is that the costuming department just slapped a Galactica patch on Adama's flightsuit because that's what was lying around. It just goes to show you how little the idea of there being "battlestar groups" or hull numbers really matters to the writers or any of the production staff.
If that's not enough, from the first shot of Galactica from the Miniseries where we zoom in to the port side of the ship, you should see the hull number, but you can only see "BS" - the number itself isn't even there. This shot has been recycled many times, including in "Razor". Sometimes, the entire hull number marking isn't even there (watch for that in the Miniseries, where Starbuck surveys damage to the port pod). We just have to take 75 and 62 for what they are, just numbers.--OrionFour 02:31, 29 December 2007 (CST)

Could we ask Bradley? He can't have that much to do at the moment...OTW 12:22, 29 December 2007 (CST)
Why even assume that the numbers are somehow in order or chronological? Real-life militaries don't do that either. Just because there is a 139th squadron of something, doesn't always mean that there are 138 before it. All in all, it's just a number. No reason to scrutinize it endlessly. And yes, the producers don't sign off on every detail the special effects team or the prop department does, which sometimes leads to contradictions. I'm sure they have more important things to worry about than the "correct" assignment of ships to fleets.
All the more reason, to just leave it as it is. Which kinda makes sense. No particular order, and battlestar groups are numbered after their lead ship for some reason. That might just be because the prop department simply wrote "BSG-62" on the patch for no particular reason (aside from going by the Galactica patch), but since there likely won't be any other battlestars shown in in the fourth season, it also won't be contradicted or clarified further. --Serenity 13:42, 29 December 2007 (CST)