Socrata Thrace was a former member of the Colonial Marine Corps who fought in the first Cylon War. Thrace was stationed on Medra, in a region dominated by dense jungle, after which she suffered from entomophobia—the fear of insects. She retired after a lifelong career with the rank of sergeant major (TRS: "Maelstrom").

At one point, she was married to Dreilide Thrace, a piano player of some renown. Following the birth of their child, Kara, Socrata asked Dreilide to give up his career in music in favor of a steady profession; Dreilide refused and left his family (TRS: "Someone to Watch Over Me").

While being interrogated by Kara Thrace, Leoben Conoy claims that she had been physically abused by her mother, long ago:

You were born to a woman who believes that suffering was good for the soul, so you suffered. Life is a testament to pain, injuries, accidents. Some inflicted upon others, some inflicted upon yourself. Surrounds you like a bubble but it's not... real it's just-- that's just something she put into your head. It's something that you wanna believe 'cause it means that you're the problem, not the world that you live in. You wanna believe it because... it means that you're bad luck. Like a cancer that needs to be removed. Because you hear her voice every day and you want her to be right (TRS: "Flesh and Bone").

Later, a Simon copy notes that Kara Thrace's hands show indications of broken bones, speculating that she endured abuse at the hands of a parent (TRS: "The Farm").

Thrace appeared to be a chain cigarette smoker and alcohol drinker. Her sparse apartment has only a handful of items, particularly the Medal of Valor, which she received as a corporal[1] and may have been awarded to her during the Cylon War. A bottle of Virgon Brew is also seen momentarily.

Leoben's claims of abuse are confirmed by her daughter when she discusses one incident with her husband, Samuel Anders. Kara Thrace reveals that her mother broke her hand by holding it against a door jamb and slamming the door shut, to punish her daughter for placing plastic insects in her shoes; in return payback for earlier abuse at the hands of her mother.

Thrace was diagnosed with a cancerous gastric tumor four years before the destruction of the Twelve Colonies by the Caprican Colonial Forces Veteran's Hospital. Vowing never to return to see her mother, Kara Thrace never saw her mother before her death.

Years later, Kara Thrace is given a mysterious opportunity to visit her mother at her deathbed by a being with Leoben's appearance (TRS: "Maelstrom"). 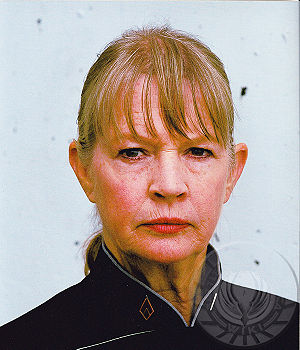