There are many stories that were written for the screen, but could not be told through that medium for various reasons. Whether the scripts were unshootable, spec scripts, early versions of aired episodes, or pushed back for a later season that never came, the Battlestar Wiki and its redoubtable contributors have found various scripts that were never produced.

Of course, their canonicy is debatable, but these are looks at stories that may have been to shows that have long since ended. Take a look. 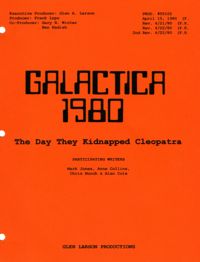 In the script that was being produced when Galactica 1980 was officially cancelled, the story "The Day They Kidnapped Cleopatra" tells of Xaviar's continuance of his self-appointed mission of improving Earth's technology in the distant past. In this outing, he pretends to be a god to Cleopatra, however in order to dispel those who doubt Xaviar's claim, she poisons his drink, forcing Xaviar to frantically seek out Jamie Hamilton, Troy and Dillon in 1980 to get medical assistance. Unfortunately, he brings along Cleopatra to the future as well, thus jeopardizing Earth's timeline in the process.

Tellingly, the script does not include mention of the Super Scouts, and seems to take place after the episode "Space Croppers".

... that the land probes in the script "Showdown" would later be introduced in Galactica 1980 as the turbocycles?
... that Boxey meets a gold prospector named Jaspar in "I Have Seen Earth", who gives him a medallion with all seven of Earth's continents on it?
... that Bojay was slated to appear in "The Furlon", which itself would later be known as "The Man with Nine Lives", guest starring Fred Astaire?

Dillon: Troy... on Earth, they have a saying called, 'good news' and 'bad news'.
Troy: I have some news for you, too.
Dillon: Good or bad?
Troy: Bad?
Dillon: (disappointed) Oh... I thought you'd have the good news... mine's bad. Cleopatra's escaped.
Troy: Xaviar's escaped from us!
Dillon: Boy, we do make a team.

Things you can do

We need your help in filling out this area of the Wiki. So if you have time on your hands, check out the following articles and download the attached scripts (available at our sister site, Battlestar Pegasus, in PDF format) and help us analyze and dissect these scripts:

For a guide to how we'd like these articles to be, see our article on the Galactica 1980 script: The Day They Kidnapped Cleopatra.

You can check out more about unproduced scripts from these web resources: