The Mercury class battlestar is an advanced Colonial capital warship/carrier introduced into the Colonial Fleet sometime after the First Cylon War.

The physical appearance of the Mercury class is different than that of the original battlestar. The "neck" section is smaller, and the Mercury class is equipped with eight sublight engine pods, compared the older class's four. These are also more "boxy" in appearance than those of the original. The flight pods also appear to have two entrances each, above and below the mid-line. Combined with computer assisted landing, this gives the Mercury class a faster rate of Viper recovery than Galactica. Unlike Galactica, Pegasus appears to have a full armor "skin", but in Galactica's case this may have been deliberately removed prior to its scheduled decommissioning.

This, probably the largest of the battlestars, may be able to carry a maximum of 180 Viper Mark VII fighters (six to eight squadrons and one reserve squadron)[1].

The gun batteries on the Mercury class are arranged very differently from Galactica's. Where as Galactica's large guns are clustered along her top side, with secondary batteries concentrated along the flight pods, the guns of the Mercury class are found all over the ship (TRS: "The Captain's Hand"). The greatest concentration of large turrets are found along the side of the ship, within the valley created by the upper and lower halves of the hull, including the flight pods. Four are mounted on the underside of the upper hull on the ship's bow, below which sits four non-turreted large guns; these form the main forward batteries. Two more turrets are mounted on the front and back of each flight pod. The Mercury class's secondary guns are distributed all over the ship and do not clearly emerge from the hull like Galactica's. 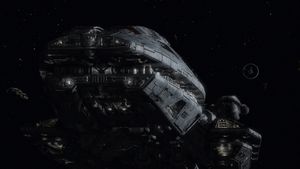 Pegasus from fore and below, with the Fleet in the background 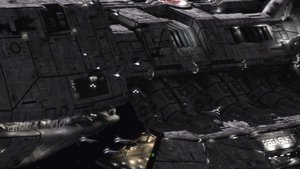 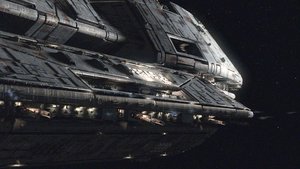 Some of Pegasus' batteries

Based on figures from the episode "Pegasus", the standard crew complement of a Mercury class battlestar is in excess of 2,500.

In addition to having better armament and weapons than Galactica, the Mercury class battlestar has production facilities to build new Viper Mark VIIs from basic resources (TRS: "Scar").

The visual effects artist of the re-imagined Pegasus, Jose A. Perez, has commented that, "The new design was somewhat of a cross between the look of the old class battlestars, and yet with elements of the new one. Aside from that, it has mostly hull plating (to absorb more damage) , as opposed to the Galactica which has more ribbing." Mr. Perez also commented that, "The harder edges [ of the Pegasus ] were intentional as well, to match the interior style of the sets more."