For the component of the same name, see: Turbine (component). 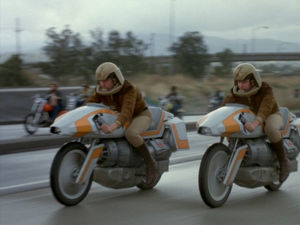 The flying motorcycles on a highway.

Turbines[1], also known as flying motorcycles and turbocycles due to their similarity to the Earth bike, help Warriors like Troy and Dillon to get around quickly, and escape quickly if necessary. The motorcycles appear normal and are usually operated as wheeled ground vehicles, but can also be used as aircraft if the situation requires it. They can also be rendered invisible by pressing a hidden switch located between the left handle and the seat, in order to avoid detection when parked (1980: "Galactica Discovers Earth, Part I"). Additionally, the motorcycles are outfitted with forward mounted laser guns, which Troy and Dillon use to strafe the Nazi train station, thus allowing the Jewish prisoners to escape from the boxcars (Galactica Discovers Earth, Part III).

At several points during the Galactica 1980 television series, Troy and Dillon are forced to engage the flying mode of the turbines in full view of civilian Earth people who have never seen the technology. This leads to looks of amazement from Willy's assorted bikers and law enforcement personnel who witness the bikes soaring into the skies (Galactica Discovers Earth, Part III). This is a source of comic relief with the series.