This article details how the Cylons compromised Colonial Fleet defenses by cracking the Colonial flight operating system in the Re-imagined Series.

For other related computer or biological attacks, see Virus.

Developed by computer scientist Gaius Baltar, the Command Navigation Program (CNP) is an operating system[1] utilized by the Colonial Fleet and some civilian spaceships in the Twelve Colonies of Kobol.[2]

Installed in the central computers of Vipers and Raptors and in the navigation computers of almost all battlestars, the CNP was more than two years in the making. 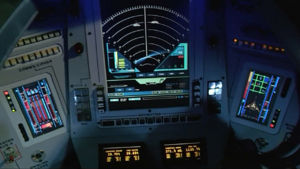 The CNP managed the avionics of Viper Mark VIIs and almost all battlestars before the few fighters that survived were retrofitted after the attack.

Unbeknownst to Dr. Baltar, his lover and co-writer of the CNP turns out to be a version of the humanoid Cylon known as Number Six. The Cylon infiltrator programmed backdoors into the CNP so that the Cylon attack forces could render any ships that use the operating system to shut itself down by a remote command.

Battlestars and fighters begin to shut down during the Colonial defensive "as if a switch were flipped."[3] Communications officer Anastasia Dualla describes reports of "system failures" throughout the Fleet and how at least one battlestar loses power when the attack begins (TRS: "Miniseries, Night 1"). When the Cylon fleet jumps in during the [[Fall of the Twelve Colonies], they use the CNP to take down an entire battlegroup over Caprica as well as the defense mainframe, leaving ships drifting out of control and easy targets (TRS: "The Plan").

Usage of the CNP on Galactica

The CNP was previously received by Galactica, but the program was never loaded into the primary memory of the ship's navigation computer. Galactica itself is spared from Cylon computer attacks as the CNP is not loaded on any of its computers, nor were its computer systems networked, sparing the ship from any backdoor or cracking attempts. However, Galactica supports a modern squadron of Viper Mark VII fighters, which received the upgrade. As a result, the squadron is massacred by two Raiders on their way back to Caprica.

Lieutenant Felix Gaeta has the CNP source code purged from the mainframe on Baltar's instruction. The program is also retrograded on the flight systems of surviving Mark VII Vipers, Raptors, and civilian ships (TRS: "Miniseries, Night 2").