A series of video blogs pertaining to Caprica were produced during production of both the pilot film and the series itself. They were formerly available online during the time of the series' airing, but are available on the home video releases.

A majority of these are offered in low-resolution, so the video content will show that.

A British Columbia train station standing in for the Maglev station, with hapless souls boarding the ill-fated Maglev 23.

"What the Frak is Caprica?" discusses the placement of Caprica in the Re-imagined Series universe, how the series is filmed and thematically different from its predecessor. 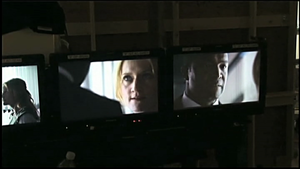 A scene between Roger R. Cross and Paula Malcomson filmed with multiple cameras, outputted into video feeds in the Director's Village as overseen by director Jeffrey Reiner.

Director Jeffrey Reiner discusses the look of the show, and how the filming method shows a world that has a strong foundation that will, in time, erode into anarchy. Therefore, the cinema verite approach was not used in shooting of the pilot.

Remi Aubuchon notes that Reiner shot the Pilot with three to four cameras, shooting both sides of a scene. He also notes that Reiner's approach to directing actors is minimalist, allowing for "unorthodox" performances and style. Reiner elucidates on this, believing that it allows for capturing richer performances by reducing the number of times one side is shot, then resetting everything up again and shooting the other side of a discussion. This allows the actors to always "be on" in portraying their characters, as they don't know what camera angle will end up being captured in the final edit.

This method also results in the doubling of footage, as Aubichon notes that he watches 6 hours of dailies per day versus the typical 2 to 3 on television shows that he's worked on.

This featurette shows Roger R. Cross in the role of Tomas Vergis, filming scenes with Paula Malcomson (Amanda Graystone) in her office at the hospital. Cross' scenes were excised in the final cut from the pilot, and the role was recast with John Pyper-Ferguson.

Additionally, Paula Malcomson is seen interacting with Reiner and his assistant, getting a performer (playing the doctor, nicknamed "Doctor Phillips") a line so he can get a credit with the acting union. 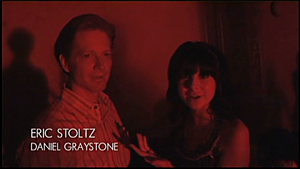 Alessandra Torresani walks around The Orpheum (where the V-Club was shot) introducing various cast and crew, including Eric Stoltz.

Director Jeffrey Reiner and writer Remi Aubuchon discuss the creation of the V-Club, noting that it is an evolution in social media where the distinction been fantasy and reality has been blurred.

Actress Alessandra Torresani walks through The Orpheum, the theater where the V Club is set, introducing various cast members to the online audience, starting with Avan Jogia and working her way to Eric Stoltz and, later, Magda Apanowicz. Along the way she introduces groups of extras, particularly a tattooed-group.

Reiner notes that the V-Club is particularly fun to shoot given that anything can (and does) happen in that world, and is absent of consequences that would transpire in the real world. 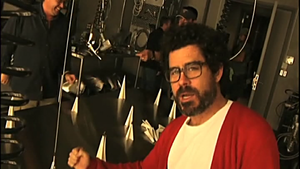 Director Jeffrey Reiner hitting the table where the "Frankenstein moment" in the Caprica pilot occurs.

Director Jeffrey Reiner on the set of the lab where Zoe-R is born, as crew sets up shooting for the scene. Reiner refers to this as an "easter egg" scene for Re-imagined Series fans, noting it is the "Frankenstein['s monster] moment."

He shows off key pieces of set decoration in the scene, notably the cardboard stand-in in the form of the U-87, as well as identifies some of the tools on the nearby workbench, including a "fiber optic quadulated finger poker," a "pulser" that gives life to the Cylon construct, a failed chest cavity for the U-87, a neuron transmitter, and a rack of tanks for various fuels and liquids within the U-87.