I am new to the site and wanted to say that it is one of the best Galactica sites on the web. I have used it as a reference source on many, many occassions. Thanks to all the contributors.

A few of weeks from now, I have an opportunity to get an autograph from David Larson (Baby Walker from TOS and one of the Super Scouts). Does anyone have a screen capture of him that I could get him to autograph? Thanks Larrydale140

Hi, Larry. A number of folks that work on the Battlestar Wiki:Original Series Article Development Project have the DVD collection and have contributed many screenshots. I would direct your request on The Super Scouts article to request this picture. Oh, in the future, to sign and date/timestamp your talk entries, just place a couple of hyphens and four tilde ("~") symbols. --Spencerian 16:12, 8 February 2006 (EST)

The Walker article has the best shot that I could find in Greetings From Earth. I could take a shot of the whole scene (that includes Sarah holding him), though, if you wanted something bigger to print out. You might ask Mokwella about the Galactica 1980 stuff, as he's been the ONLY source of screenshots and information from that series that we've really had. --Steelviper 16:30, 8 February 2006 (EST) 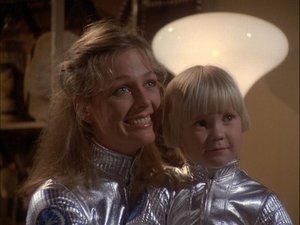 If you click through the thumbnail on the right you should find the full 640x480 screenshot. It's the best pic of Walker that I could easily identify from Greetings from Earth. --Steelviper 18:18, 8 February 2006 (EST)

Home, Part II lacks a summary section in the episode summary. I JUST deleted that episode from my DVR last night (was cleaning things up), so if somebody who has a copy of that could take that on that'd be great. It'd be a shame to have a gap in our RDM episode coverage. --Steelviper 11:12, 8 February 2006 (EST)

Does anyone know why Billy was killed off? I have been unable to find an official statement on this issue. Did the actor Paul Campbell transfer to a different show or was his death solely story oriented? Is it possible he may come back as a cylon?

Paul Campbell will be starring in another show, I forget the name.--Noneofyourbusiness 18:26, 8 March 2006 (EST)
According to RDM's podcast for Sacrifice, the decision to off him was done to let Campbell take advantage of the leading roles he had been offered in other series. -- Joe Beaudoin 17:25, 8 March 2006 (CST)
It's a shame because I liked the Billy character, and Paul Campbell is pretty funny. See David Eick's Video Blog Number 11: Billy Gets No Respect. I just watched it last night and am still smiling. -- Laineylain 14:29, 9 March 2006 (CST)

I've noticed an uptick in the amount of spamming recently, all linking to the same sites (looks like some sort of a prescription drug outfit). Examples:

... (I'm going to stop updating this list. It's redundant with the IP block list right now. If we don't do a range block by then I may copy-n-paste the current "week" block people to make sure they get a longer stint.)

I don't have access to their IP addresses, but it appears from the IP block log that they are trying to repeat offend. Just wanted to let you guys know so you can be on the lookout. These persons (if there are, in fact, multiple), have been amply warned and the "leniency window" is quickly slamming shut. --Steelviper 12:26, 9 March 2006 (CST)

I wonder if they're targeting the TOS pages just to aggravate me. Or maybe they're trying to target lower-traffic pages. I don't understand the strategy, but there's not hiding from the Recent Changes (even if they mark their changes as minor). --Steelviper 17:10, 9 March 2006 (CST)

The idea is that they chose short articles on the assumption they have low traffic, I believe; they probably aim for stubs linked by 2-3 well-linked pages, as a trade-off for higher Google returns vs. visibility to wiki-users.
By the way, is there a way to run a script to pass/fail edits? If so, simple blocking of any edit that adds over, say, 10 URI's to a page would fix the problem until the attacking bots got updated. ...I hesitate to suggest a long-term solution of requiring membership in a group (to which users with 2-3 valid edits are routinely added) to add external links at all.
On the other hand, a Captcha for all edits seems more feasible; captchas for non-members of a group would allow for maintenance bots and not annoying high-edit-count humans, too. [I posted this 11:34, 2006-03-10 (CST) and appear to have forgotten to sign it. --CalculatinAvatar 00:10, 5 April 2006 (CDT)]

Captchas are a good idea but unfortunatly easily broken, its best to use a very strong captcha in conjunction with other forms of spam control. On my forum for example i have a hidden field on the forms that means a registration is only made when a person psysically loads the page to sign up. Spammers generall use automated programs to just call the scripts and dont actually load the site. Perhaps a similar idea to this would work? Mercifull 03:53, 28 March 2006 (CST)

Thanks for the alert, Shane. Maybe this onslaught might merit another look at the checkuser function (for the purposes of doing some ip range blocks)? --Steelviper 17:47, 19 March 2006 (CST)

Actually, I just implemented MediaWiki anti-spam patch. It's similar to what I had done before, but when I upgraded the Wiki software the customized files I created were overwritten as well. (Which is why this happened in the first place.) My bad. -- Joe Beaudoin 17:49, 19 March 2006 (CST)

It has come to my attention that vandals are planning a massive attack against all wikis on Easter (April 16th), having started at Wikipedia-Prime as well as MemoryAlpha, etc. Stay sharpe. --The Merovingian (C - E) 23:27, 4 April 2006 (CDT)

Can we do admin account activation here? Then you could lookup the username and ip to see if its the same as any of the spammers on the other sites before letting them in? Purely as a temporary measure of course --Mercifull 09:33, 5 April 2006 (CDT)

Perhaps as a means of raising a little bit of funding that Joe should register as an amazon.com and .co.uk affiliate and change the links in all the merch pages accordingly so that if anyone chooses to purchase any dvds, books or music from a link on this site at least a bit of credit goes towards running this place? --Mercifull 10:10, 5 April 2006 (CDT)

Okay I've got to ask: What the FRAK does that mean? : "We are delicate, we do not change your content" BS! I don't know that much about how this works, but how could this guy possibly benefit from this? Is there something like, the more sites that carry these links the more popular they seem because the number of sites linking to them can be detected? I don't know. Or is this just a vandal having fun spreading cruft? Because if he is...I cannot understand what the heck his agenda is. If he's showing off his "skillz" anyone could do what he's doing, we fix it almost immediately anyway, and I don't see any clear message. To be honest it seems more like an automated thing someone set up, but if so, why not some relevant message or ANYTHING? In short, unless this guy publicly says WHY the heck he's doing this, he's a coward. --The Merovingian (C - E) 09:56, 1 May 2006 (CDT)

No, there's definitely financial motive at work here. Vandals that do it for fun are at least a bit more "creative" in their modifications. The best I can guess is that he/she/it is adding the links in order to raise the pageranks of those links in search engines (like you said above). The more sites that link to you the more "relevent" your site is. Google and the other search engines try to ignore the spam, but it must work to some extent because the spammers are at the gates. While I'll grant that the "numeric vandal" is more "delicate" than other spammers of that kind (the particular code inserted leaves no visible footprint, as opposed to some that create a massive "blank" area at the bottom of the article that you have to scroll through), but vandalism is vandalism. It's disheartening how persistent this numeric one has been, creating a couple of accounts every few days. --Steelviper 10:12, 1 May 2006 (CDT)

There is absolutely no spoint in these spammers posting thier links here, as far as i know mediawiki has the rel=nofollow tags on links meaning that google wont increase pagerank of links from any wiki's (if that feature is turned on) Perhaps it might be worthwhile installing some kind of CAPCHA on signup, to stop bots from automatically registering? --Mercifull 10:37, 1 May 2006 (CDT)

Hello, I've been a member of the Battlestarwiki for a while. I'm a fan and have followed the series. I would just like to announce that I started a channel for the battlestar wiki on freenode. irc.freenode.net and the channel is #battlestarwiki --Majorthomme 07:00, 29 April 2006 (EST)

So far as I can tell, that doesn't exist, though I admit my familiarity with IRC extends up to following along with Gaim's dialog boxes and then abruptly stops. --CalculatinAvatar 01:49, 30 April 2006 (CDT)

If people are really interested in having a proper bsgwiki/general battlestar galactica irc chat then i am an IRCOP on a server and could set up a proper one. --Mercifull 06:15, 30 April 2006 (CDT)

I would just like to remind everone that while IRC, AIM and GTalk may be fun, all important discussions deserve to be posted to the talk namespaces, so that everyone can participate in them. --April Arcus 12:53, 30 April 2006 (CDT)

I concur. It seems the previously mentioned one (to which Shane referred) is a general chat about the show, not the wiki, so it's probably not an issue. --CalculatinAvatar 01:14, 1 May 2006 (CDT)

I have just reverted more columbia references here and here --Mercifull 10:49, 2 June 2006 (CDT)
I reverted some of his stuff yesterday (June 1) after I came home. If it continues and if the user doesn't bother communicating with us about where he gets his sources, I'll consider blocking him for 48 hours. -- Joe Beaudoin So say we all - Donate 11:02, 2 June 2006 (CDT)

What Joe said. Shane and Mercifull, thanks for watching out, but be careful of your phrasing (the use of the term "blocking"). We'd rather assume someone has a reason rather than just trying to be annoying. It doesn't look like he's bothering to read, which suggests to me he doesn't know how to read their talk page, or doesn't care. --Spencerian 11:10, 2 June 2006 (CDT)

After yet again another edit to the Galactica type battlestar article today without a response to us that I can locate and after numerous attempts from us to ask his source, I have blocked this user for 3 days (I would have done it for 48 hours per Joe but I wasn't sure of how to do this in the special page) per the vandalism rules, with a response to him on his user page. Hopefully we'll hear something from this contributor in a few days. --Spencerian 17:32, 4 June 2006 (CDT)

He looks less like a generic troll and more like someone who adamantly belives in fanfic. I have no tolerance for his changes, but I wouldn't permanently ban him just yet; warning bans were good; either straighten him out her escalate. --The Merovingian (C - E) 21:05, 4 June 2006 (CDT)