I am a trafficker of information, I know everything I can.

The question is, do you know why you are here? You came to BSWiki for information, yes, but this is not a reason, this is not a why. This information itself, its very nature, is a means, it is not an end, and so, to search for it is to be looking for a means to do...what?

What do *I* want? What do all men with power want? More power.

"By the power of Truth, I, while living, have conquered the Universe"

Remember, remember, the Fifth of November
Fairness, justice, and freedom are more than words...they are perspectives
"....Governments should be afraid of their people"

On May 13, 2005, an elite Trek fan was sent to prison by a military court for a crime he didn't commit. This man promptly escaped from a maximum security stockade to the internet underground. Today, still wanted by the government, he survives as a soldier of fortune. If you have a question, if no one else can help, and if you can find him, maybe you can ask The Merovingian.

"Never let your sense of morals get in the way of doing what's right."

"Individual science fiction stories may seem as trivial as ever to the blinder critics and philosophers of today – but the core of science fiction, its essence…has become crucial to our salvation if we are to be saved at all."

ALL THESE WORLDS ARE YOURS EXCEPT EUROPA. ATTEMPT NO LANDINGS THERE.

"In approaching our subject with the sensibilities of statisticians and dissectionsists, we distance ourselves increasingly from the marvelous and spell-binding world of imagination whose gravity drew us into our studies in the first place...This is not to say that we should cease to establish facts and to verify our information, but merely to suggest that unless those facts can be imbued with the flash of poetic insight then they remain dull gems; semi-precious stones scarcely worth the collecting..."

I would like to welcome all German language viewers of BSG, who just recently were exposed to the joys of BSG when "33" premiered in Germany on February 8th, 2006. I would like to welcome them with a traditional Teutonic greeting: Wenn ist das Nunstück git und Slotermeyer? Ja! ... Beiherhund das Oder die Flipperwaldt gersput!

"Hey, man, you don't talk to the Merovingian. You listen to him. The man's enlarged my mind. He's a poet-warrior in the Classic sense. I mean sometimes he'll... uh...well, you'll say "hello" to him, right? And he'll just walk right by you. He won't even notice you. And suddenly he'll grab you, and he'll throw you in a corner, and he'll say, "do you know that "if" is the middle word in life? If you can keep your head when all about you are losing theirs and blaming it on you, if you can trust yourself when all men doubt you..."

"They told me that you had gone totally insane, Merovingian, and that your methods were unsound."
"Are my methods unsound?"
"I don't see...any "method" at all, sir." 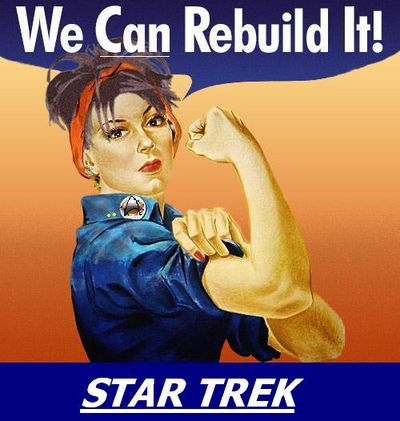 "When I first took command of this post, all I wanted was to be somewhere else. Anywhere but here. But now, four years later, this station has become my home. And you've become my family. Leaving this place, leaving you, is one of the hardest things I've ever had to do....I promise, I will not rest until I stand with you again. Here. In this place. Where I belong."

Music To Work To

Mercifull I want you to delete both of my private photos from BattlestarWiki. The one of Richard Hatch and me, and the one of me outside of Parliament. They're my personal photos and I don't want them up anymore. Thanks.