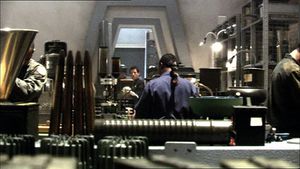 Machines in the armory. 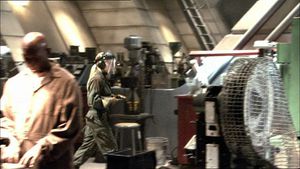 Machines in the armory.

On Galactica, the armory creates and stores munitions for its fighters and probably small arms ammunition for sidearms and rifles used by pilots and Marines. It is unknown whether this facility always existed, or if it was improvised after the Cylon attack left the crew with no chance of replenishment from the Colonial Fleet.

With the shortage of experienced enlisted machine workers, Galactica has tasked some civilians to aid in this important task.

Captain Lee Adama arrests Asha Janik in the armory for sabotage of Viper gun rounds. She yells her pacifist agenda as she is removed from the facility (TRS: "Epiphanies").