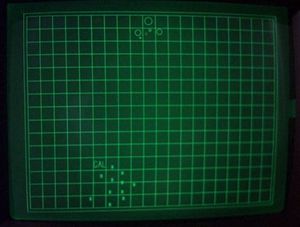 Alpha Six quadrant is a binary star system outside the Cyrannus galaxy where Proteus is located.

According to scans from Galactica, the star system has a concentration of asteroids.

After encountering Robber on an asteroid, Starbuck is told that the asteroid belt is a good place for pirates to hide and strike from (TOS: "The Long Patrol").