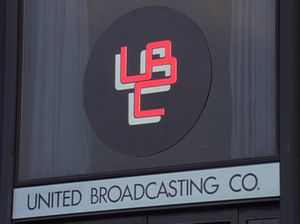 The outside of the UBC building (Spaceball).

United Broadcasting Company (UBC) is a United States television network on Earth based in California. Its main building is located in Century City, California.

In the Galactica Discovers Earth novelization, the company is called the United Broadcasting Corporation, and Dana Anderson is its West Coast News Director. Jamie Hamilton initially gets a job at UBC given her connection to Alfred Mortinson and the two "terrorists", having been offered a 3 year contract upon her success of getting an interview with Mortinson[1]; however, after Anderson believes her to be sympathetic to the terrorists, she quits[2] and joins Troy and Dillon in their adventures[3].