For information on the Original Series "bridge," see: Command chamber. For the Re-imagined Series counterpart on their basestars, see Basestar command. 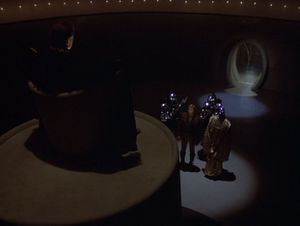 Lt. Starbuck is presented to Baltar in the throne room (TOS: "Lost Planet of the Gods, Part II").

The throne room is a chamber apparently standard on all Cylon basestars.

The chamber consists of a raised throne seated in the middle of the circular room, which is spotlighted, as are four additional areas: two areas to the left and right of the throne, the area between the door and throne, as well as the doorway itself. There is no visible means of coming down from the throne, nor is there a visible means of instrumentation or functionality in the throne chamber. The throne itself is capable of swiveling via an electronic mechanism.

There is only one entrance with a pocket door made of glass; the doorway itself is elliptical in design.

The room is typically unguarded and the doors appear to be activated by motion sensors.