Thus, given that there is also no actor or actress listed for this character, I must assume that this entry is without worth and I have tagged it for deletion.

Since I know there is some debate over this page, I have decided that I will make the final decision on Monday, October 10th, since I do have a lingering question regarding the last edit by Kahran, in particular the comparison to Gaeta in terms of duties (as well as the question of gender classification): Kahran, where is the source to this information?

Kahran, if you can provide a source to this data that is verifiable, then I may keep the page online. Sources include URLs andscans of periodicals. So if this information can be provided, please post it on this talk page, and not on mine. Thanks! -- Joe Beaudoin 17:36, 5 October 2005 (EDT)

Yes, I saw this after I read "The Captain's Hand" page. However, you also need to cite this as a source on the Hoshi article as well... and since it qualifies as spoilerific information, you need to use the {{spoiltext}} tag. (I've already corrected this issue for you, so you don't need to correct this instance.) Thanks! -- Joe Beaudoin 12:04, 6 October 2005 (EDT)

Er, forgive my ignorance, but what the heck is Gateworld? I mean--how reliable are they as a source? Are they connected in some capacity to RDM or Universal or the SciFi Channel or something? I mean--citing sources is great, but part of the point is that they be reliable sources. Forgive me if I am calling foul on an acceptable source. --Day 16:21, 6 October 2005 (EDT)

They're a stargate fansite that occasionally posts BSG spoilers. They've been fairly accurate in the past, but I agree that the intersection between spoiler "sources" and regular episode sources is problematic. --April Arcus 17:08, 6 October 2005 (EDT)

I still think this article should go. Are we waiting for the extended version to come out on DVD (i.e. another half-season and some?) or has this merely dropped from the radar? The way I see it, if some Hoshi shows up in the Pegasus CIC in Resurrection Ship, Part I or II, we could always re-create the article. As it stands, I think it should go. --Day 00:43, 2 January 2006 (EST)

Agree. I do think we should give Kahran or another interested party 24 hours to defend its existance, though. Tagging for deletion. --April Arcus 01:37, 2 January 2006 (EST)

No. Linda Park was Japanese, Grace Park is Korean. These are two distinct things. That, and Lt. Hoshi on Enterpise was a complete non-entity, as were all of the other supporting characters. ---Ricimer, 17 Sept, 2005

Well, they didn't walk around and say the name of each of Pegasus' CIC crew, but it could have been the unamed tactical officer, or someone else. They might turn up in later episodes ---Ricimer, 24, Sept 2005

Seeing no reason to have articles about characters without mention or actor/-ress, isn't a good reason to ignore the creation of such articles. I mean--there's never a mention of Petty Officer Luke Skywalker. Neither do we know who plays his part. Maybe we should make a page about him, too. That example is a bit extreme, perhaps, but there's no source cited for this and, as a member of the Citation Jihad, I'd like to see one. I think this page should go. Also, I still find the use of bullets rather than tabs to be disruptive formatting, which is to say it distracts my eye from reading the words, rather than helping. --Day 23:35, 3 October 2005 (EDT)

who said that linda park is japanese? park is a distinctly korean name.

Both Linda Park and Grace Park are South Korean actresses. Ensign Hoshi from ENT was a Japanese character.

Is there an authoritative source for the rank? The enlisted Hoshi being an equivalent in duties to the commissioned Gaeta seems thoroughly odd. Of course, if it's canon, the oddity stands, but it seems weird enough to merit complete certainty. --CalculatinAvatar 21:37, 1 January 2006 (EST)

Reopening this line of questioning - it's clear that his role is closer to Dualla's than Gaeta. Dee is enlisted, Gaeta is comissioned - which is Hoshi? --April Arcus 23:17, 23 February 2006 (EST)

Hoshi is listed in the closing credits for Resurrection SHip part 1. He also briefly appears on the Pegasus bridge. I'm going to upload a pic of him along with appropriate template character information.--Ltcrashdown 17:53, 8 January 2006 (EST)

We don't know which one was him. The actor's IMDB page doesn't give a photo. There are two crewmen in the Pegasus CIC that talk (I think he's the black man standing in front of the radar display, as opposed to the older white man sitting at a console, but I don't know for sure). --Ricimer 18:31, 8 January 2006 (EST)

We had trouble finding out if Hoshi was one of two Pegasus CIC officers who both had speaking lines, the black one or the white one; he is confirmed as the white in one "Captain's Hand" when he is referred to directly by name. --The Merovingian 23:32, 17 February 2006 (EST)

Actually, I do believe that Hoshi can be seen in the entire Cain trilogy. I'm pretty sure that we see himin Pegasus CIC when Cain has her phone call standoff with Adama (he's the guy with the...it looks like a Romulan hair cut). --The Merovingian 01:48, 24 February 2006 (EST) 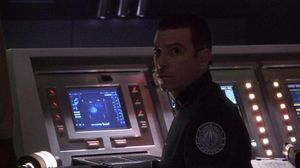 Is it just me or is Hoshi doing communications on Galactica in "The Passage". The scene where they wait for Kat's Raptor to appear on Dradis. --Serenity 17:42, 9 December 2006 (CST)