After watching Scattered again recently (my I got my new girlfriend hooked on BSG so I am rewatching all the episodes with her) I noticed that Gaeta refers to himself as the OOD, or Officer On Deck, in the head with Dee. (PS by the way, why were they in the same head? Dee is enlisted, Gaeta is an officer. Moving on.) So here's my question: Is OOD a position or a status? Is the "Tactical Officer" the OOD when he is on duty, or are the two terms simply synonymous? --Kraetos 22:43, 28 May 2006 (CDT)

"The Navy has decided to call in three members of the commanding crew of the USS Greeneville. That would be the commanding officer, Scott Waddle, the X.O. or executive officer and the OOD, the officer on deck, a lieutenant junior grade." "And the executive officer and the officer on deck of the USS Greeneville at the time of the accident have been designated as parties to the inquiry. They will be afforded their due process rights, including the right to be represented by counsel." [1] I concur with Merv. It sounds like a dynamic title (like NCOIC, non-commisioned officer in charge... depends on who's on duty or maybe more of a "rotating" position in terms of who is "on call" for that particular period).

That was my hunch but I wanted to be positive. Plus, I just realized that the way he says "WAS" the OOD implies that he is only the OOD when he is on duty, meaning it is a status and not a position. Thanks merv and steelviper. --Kraetos 21:10, 29 May 2006 (CDT) (PS sorry I haven't been around much lately. I was busy with school, but I just graduated so I should be back in the fold now!)

He's listed as having been the "Presidential Aide." In "Collaborators," he's referred to specifically as Baltar's Chief of Staff. Would it be worthwhile to make a new title caption at the bottom of the page to reflect this? The only reason I ask is because that's a pretty specific position as opposed to the more general classification of "aide." --Starscream 22:59, 21 December 2006 (CST)

Welcome, Starscream. Your information is the more correct one: the first term was used when we didn't have a precise title. Feel free to update Gaeta's title with this in mind. (Note that we normally add notes towards the bottom of the article so it's easier to keep tabs on new stuff, so I moved your comment down this talk page.) --Spencerian 00:03, 22 December 2006 (CST)

Speaking of Gaeta: is there any reason to stick with this photo? His civilian career is long over and since he's back in uniform, he should have an appropiate picture as well. --Spike 02:20, 22 December 2006 (CST)

Does anyone have a screencap of that crazy drawing Gaeta was working on in Exodus, Part II? I'm thinking that may be important in the next half of the season. Didn't RDM say something to that effect, anyway? --Drumstick 02:06, 25 December 2006 (CST)

In all the episodes where we see Gaeta wearing the colonial uniform (blue, duty), he's wearing a set of wings which would indicated to me that he is a qualified pilot. Beyond his role of plotting FTL jumps, however, we see no evidence of any ability to pilot any Colonial craft. Thoughts?AnteaterFeeder 15:07, 20 January 2007 (CST)

It's a bit weird, but I don't think it's unreasonable to assume that all officers have at least basic Raptor training. Maybe not enough to use them effectively in combat, but to get from A to B in a shuttle flight. Though I'm not sure if that should warrant junior wings, which I'd reserve for combat qualified pilots.
Btw, new topics are usually added at the bottom of the page. It's not a big thing, but I think most people look there if they see a new addition --Serenity 05:45, 21 January 2007 (CST)

Actually, every once in a while, especially early in the show, Gaeta is seen without wings. This example pic is from the ceremony at the end of the Miniseries. --06:51, 21 January 2007 (CST) 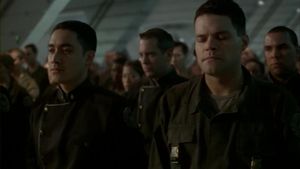 What is a costuming glitch? The fact that he has wings 98% of the time, or the one or two scenes where he doesn't? If it's OK with everyone, I would like to add in the notes section the inference that Gaeta holds some sort of flight status-- even if it's just basic flight. I don't recall seeing Lt. Hoshi, Ens. Thornton or even Capt. Kelly have wings.AnteaterFeeder 12:17, 26 January 2007 (CST)

Yeah. He wears wings almost all the time, so it's likely that he's somewhat qualified. Probably just Raptors though. I wouldn't write that's he's a Viper pilot. The error is in the few cases where he doesn't wear them. And it's a bit fanwanky to write everything I said above, but just saying "Since he wears wings, Gaeta probably has had at least basic flight training" isn't. --Serenity 13:06, 26 January 2007 (CST)

Very, very (very) minor point... Looking at the name 'Gaeta', I always saw it as Latin-esque (whatever the Colonial equivalent of historical Latin would have been - 'Gaius' would be from the same culture, presumably). In Latin, the '-ae-' part would make the name 'GY-ta' rather than 'GAY-ta', and in the Miniseries that seems to be how it was pronounced. Is there some reason we know of why the pronunciation was changed? -- Sator 15:02, 7 June 2008 (UTC)

"Gay-ta" is simply easier to pronounce; they had problems nailing down the pronunciation in the miniseries, where they vacillated between the two pronunciations. -- Joe Beaudoin So say we all - Donate - Battlestar Pegasus 15:05, 7 June 2008 (UTC)

Now that Part 9 of Face of the Enemy reveals what Baltar whispered to Gaeta that got him stabbed with a pen, the Animosity Toward Baltar section (and the accompanying footnote) obviously needs to be updated. Since I haven't done much around here, I didn't want to just go in and mess with what was done previously without discussing it first. Should the footnote be deleted, or just amended? Was the podcast info a ruse, or have they just retconned the conversation to get rid of the dangling subplot? I don't know. Cvalin 06:24, 8 January 2009 (UTC)

The original purpose of the scene was to implicate Gaeta in the murders of Sagittarons on New Caprica during the occupation. However, since that was jettisoned, the reason for its existence (at least from inside the story) remain nebulous. Now that the webisode has aired, we see why, and so that is now true canon. However, at the same time, we do need to note the original intent of the scene. -- Joe Beaudoin So say we all - Donate - Battlestar Pegasus 06:42, 8 January 2009 (UTC)

What colony is he from?

Just watched Caprica finally and now I'm perplexed. I can't find a confirmed source but c'mon, Gaeta fits nearly all the qualifications of being a Tauron. He has tattoos, befriended by Baltar (who was classist against Capricans), plotted murder on New Caprica, plotted a mutiny, smoked, and since Taurons all have dark hair and are "ethnic" looking (as in any country on the Mediterranean) he fits the look no doubt. Eirikur 11:08, 27 December 2009 (UTC)

I came across this Wiki so I could backtrack and make sure I understood who each of the BSG characters are before proceeding with the series. I'm only in the middle of season two and I've been going through the episodes rapidly. In this entry, it mentions that plot involves abandoning earth, while earth is still the goal from where I stand in the series. This is incredibly frustrating and I wish this Wiki had some sort of spoiler warnings or (like other sites) blacked out spoiler text to avoid accidentally revealing plot turns. It's one thing to post plot information on episode pages, but to post it on character pages is a bit unexpected.

I guess I don't have any use coming back here, since I risk seeing spoilers on any page I visit and after I'm finished with the series I won't care about the information anymore :-\

I understand your frustration as I once did the same mistake myself. But spoiler warnings won't help, because what you came to read would have been spoilers to someone that has only seen the miniseries. Even just the name of some of the characters are spoilers. The only proper solution I can think up is to somehow restict the wiki to only show revisions as they were at the original air date of the first episode each user has not seen, but even this is a lot of work for someone. In the end, I have concluded that in order to avoid spoilers (not including spoilers from those with inside information), one have to either see episodes when they were first shown, or stay away from all sites writing about said show. The latter might include all of Web 2.0, as spoilers might creep up in so called signatures and even nicknames. Caldumidoan 10:15, 18 December 2011 (EST)