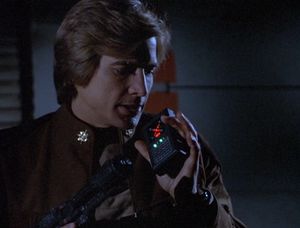 Starbuck uses a communicator to record the fact that his laser pistol is set to "stun".

The personal communicator is a communications and recording device used by Colonial Warriors, and is part of their Viper equipment.

Apollo carries a personal communicator, which he configures as a homing device after landing on Terra.

Starbuck also uses the communicator as a form of digital voice recorder in which he records a note regarding the fact that his laser pistol is set to stun during his initial contact with Nationalist forces (TOS: "Experiment in Terra").