The Lucifer Limited Edition Collectible Figure is an 1/6-scale mixed-media figure, and is part of the Amok Time release circa 2008, following their take-over of the Original Series license from Majestic Studios after its dissolution in 2007.

As is typical of 1/6-scale mixed-media figurines, this piece features multiple points of articulation (rotating head, arms, legs), is clothed using materials that replicate the look of the costume worn by the character, and includes certain accouterments.

To aid in the display of the figurine, the piece comes with a two-piece display stand consisting of a display base with the show's logo and the support arm that cradles the figure around its torso.

The figurine was officially cancelled in 2010, when Amok Time's license for the Original Series 1/6 scale line expired.[1] 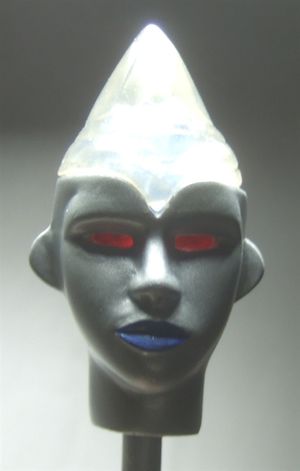 An example of the figure's eyes "glowing" when light hits the transparent cone of Lucifer's head.

The figure was billed as featuring "translucent head and eyes" thus allowing collectors to "shine a light above his head brain cavity" to make the "eyes glow!" This figurine was also billed as featuring a display stand, and accessories were not mentioned in sales descriptions from the Amok Time's online listing circa 3 March 2008.[2]

The ensemble worn by Lucifer are its red robes and high whisk collar.

A prototype for this figure was shown at Toy Fair in 2008, and displayed alongside some Cylons (Commander and Centurion) and Commander Cain figurines.[3][4]

Head sculpts for the prototypes were art directed by Amok Time's Charles Eugeni and Paul Lazo, and executed by Joy and Tom Studios.