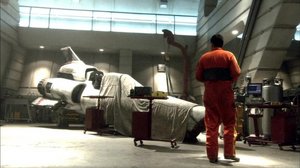 Viper 0289NC is a Viper Mark II spacefighter scrapped by Chief Tyrol after a careful inspection to see if the fighter could be rebuilt for flight.

After ripping out some datacord to ensure that the ship cannot be accidentally reflown, Tyrol marks the fighter as scrapped. Its parts are subsequently used to repair and maintain other Vipers (TRS: "Flight of the Phoenix").