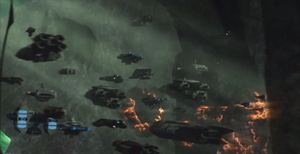 The Ghost Fleet encountered by those aboard Raptor 909 circa YR58 (Blood and Chrome).

The Ghost Fleet[1] is an assemblage of Colonial Fleet military assets written-off as lost or destroyed during the First Cylon War. In reality, it is a secret task force assembled for a counter-strike against Cylon targets, following a string of Colonial failures and defeats by the 10th year of the war, circa 58YR.

Aboard Raptor 909, Galactica Raptor pilots William Adama and Coker Fasjovik, along with civilian technology specialist Becca Kelly, happen across this Ghost Fleet en route to Djerba. They are spared destruction at the hands of fellow Colonials following the issuance of a passcode.

Following the Battle of Djerba and Kelly's upload of mis-information via Djerba's Cylon communication array, the Ghost Fleet launches its offensive, the first resounding and much-needed Colonial victory (Blood and Chrome).

The Fleet itself numbered numerous military craft, amongst them: