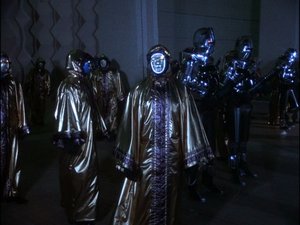 A gaggle of Cylon civilians wander outside before being strafed by Vipers (TOS: "The Living Legend, Part II").

Cylon civilian models[1] are present at non-military locations. They fill the day-to-day support roles that the rest of the models need accomplished in order to keep the empire a well-oiled machine. They wear gold-colored hooded robes, with their only apparent robotic features being their faces.

The only time the crew of Galactica encounters any Cylon civilian models is during their raid on Gamoray. The Imperious Leader gives a speech to a crowd that consists largely of civilian models, dedicating the new southern center of culture. These same civilian models wander outside the building after the planetary defenses are destroyed, and many are killed by Viper strafing runs. 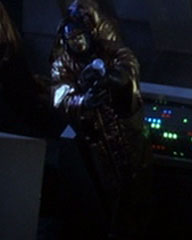 Cylon civilian models are capable of combat. During the Battle of Gamoray a few civilian models fire laser rifles at Boomer and Starbuck, before being destroyed by Starbuck's hand mine (TOS: "The Living Legend, Part II").