Corporate Espionage: Is It Going Too Far? 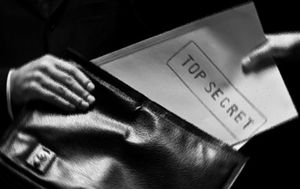 Corporate Espionage: Is It Going Too Far? is a The Caprican Opinion article written by Ralston Sinclair. It was printed in Martius 22, YR42.

I'm all for a little "friendly competition." Hey, it's the foundation on which our system of commerce is based, right? You get yours, the other guy gets nothing, if you can help it. But there are rules, people. Frak it, there's a basic morality that we cannot sway from, or else we're in the jungle.

I've seen powerful people destroyed by greed. Men and women who will stop at nothing to get ahead, and crush everyone else underfoot. They break rules. They spy and eavesdrop and cheat. And they are miserable frakkin' bastards. They look around at all they've "accomplished" in the world of Big Business and they see nothing but garbage. Is it worth it? An existential pondering if there ever was one.

But this kind of stuff will go on, and will go too far, from now until the end of time. And corporate espionage has now officially hit the big leagues as it embraced that most ghastly of crimes. Yes, we have now seen that someone will indeed kill to get what they want.

I'm talking about the recent break-in at a Vergis Corporation lab in Tauron City. A bunch of employees were killed. Killed, people. They're frakkin' dead. These weren't criminals or street thugs or any other son of a bitch that you think might've "had it coming." These were working class stiffs earning a paycheck and providing for their families. And some frakkin' bastard went into their place of work and killed them.

I say nuts to all that. This was an act of corporate espionage - someone wanted something in that lab, and they got it the old fashioned way.

Again, I must ask, to all of you who own businesses or are just always looking for that way to get ahead of everyone else: Is it worth it?