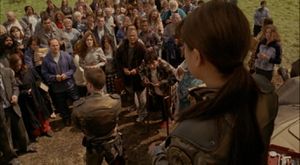 A group of refugees on Caprica await a fateful lottery number selection.

A large group (at least 134 people) of Caprican refugees[1] from cities near Caprica City[2] flee from the devastating nuclear bombing of the colony's major cities and population centers.

Many of the refugees are still wearing their sleepwear. A few managed to find time to gather a few personal items, such as paintings, books, and some baggage. Most of the frightened people, however, try to escape the destruction of their world with only the clothes on their back. Among the group is an attaché case-carrying Gaius Baltar, who, unknown to everyone else, has more knowledge of the attack on the Colonies that he would care to admit.

When the group sees a Raptor land nearby, they move to it quickly and beg to escape from Caprica. One man tries to bribe his way onto the Raptor.

The Raptor (crewed by Karl "Helo" Agathon and Sharon "Boomer" Valerii) is far too small to carry everyone. Four children, including Boxey, are allowed aboard without debate.

With only room remaining for only three adults, Valerii creates a lottery. One older woman is selected (off-screen). A second young woman with ticket #127, Giana, is selected. As ticket #47 is announced, an old woman asks Baltar (himself having ticket #188[3]) to help her read her ticket, explaining that her reading glasses are missing (not realizing they rest on her head). While Baltar considers switching his number with her #47 to get aboard, Agathon recognizes Baltar and asks him to approach. A paranoid Baltar denies any wrong-doing and escorts the old woman to the front of the crowd.

Baltar is allowed to board the Raptor when Agathon gives up his seat, believing that Baltar's intellect will be far more needed for the survival of mankind than his own. Agathon, who is injured during their Raptor's evasion two Raider missiles, carries a medkit with him.

The Raptor leaves with its maximum load of passengers, but a desperate man leaps atop the Raptor's wing, trying to gain access. After several warnings, Agathon is forced to shoot the man off the ship, killing him.[4]

Agathon eventually separates from the stranded refugees. He manages to stay alive and eventually escapes Caprica to rejoin Galactica.

With the substantial nuclear bombing of the planet and the lingering radioactive fallout, the remaining refugees eventually die from radiation poisoning (TRS: "Miniseries, Night 1").[5]