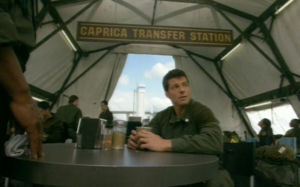 A tent at the transfer station.

The Caprica Transfer Station is a transfer point for the Colonial Fleet on Caprica.

Captain Lee Adama awaits for his Viper, which he will fly to Galactica in order to participate in the ship's decommissioning ceremony. While drinking coffee here, Adama has a conversation with the chef, Frank Bruno, where he reveals that he has just been accepted to test pilot school but is seriously considering resigning from the Fleet ("Razor", deleted scene).

Lieutenant Kendra Shaw also awaits for her Raptor here, talking with Bruno after Adama leaves. After Bruno deduces that Shaw is the daughter of Quorum delegate Marta Shaw, she reveals that she is on her way to Pegasus to be Admiral Helena Cain's aide (TRS: "Razor").