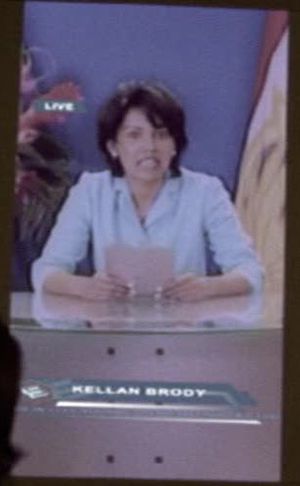 Caprica 5 broadcast moments before an explosion cuts the signal

Caprica 5 is a television news channel that provides reports of Colonial happenings to the general Caprican population. As a secondary function, the station broadcasts events from other colonies, such as a Pyramid game on Gemenon.

The station's logo is an italicized 5 made of pixels superimposed upon a hexagon. A larger 5 of the same design can be seen to the logo's left, fogged into a blue stripe. Caprica 5 has a news ticker rolling across the bottom of the screen that displays stock market reports.

Gaius Baltar gives an interview from his estate to Kellan Brody, the host of the weekly talk show The Spotlight, which focuses on Capricans in the news.

Caprica 5 broadcasts emergency reports during the Cylon attack. During the attack, Brody tells her audience to remain calm before an explosion is heard in the background. Seconds later, the station or broadcast antenna is destroyed, and the video goes to static (TRS: "Miniseries, Night 1").

Caprica 5 appears in Battlestar Galactica: Cylon War 1 with its reporter covering the events leading to the dissolution of the Caprican-Sagittaron trade agreement 40 BCH.

Despite a suggestion in the script that "maybe we should make it an older version of the logo to reflect the change [in time between the events of this comic and the Miniseries],"[1] it remains similar to its Miniseries origin.