This is a derivative work from Wikipedia's Words of Wisdom, which is permissible under the GNU FDL license. All related edits will be released under this same license.

Sometimes when you are paranoid, the mysterious group known as "They" may actually be after you.

But take heart: They aren't after you, at least not here at Battlestar Wiki.

The universe does not revolve around you

By remembering that the universe does not revolve around you, editors avoid disrupting Battlestar Wiki to illustrate a point.

Online Communities and the Cabal 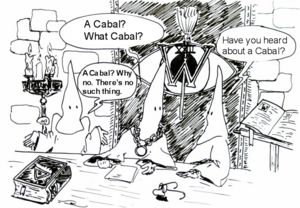 We only exist if you want us to.

A common complaint in online communities is that there are groups of users, usually longtime members of the community, who have all the power, make all the decisions, police the behavior of everyone else, and disclaim any responsibility for such actions — a cabal.

When you start accusing everyone of being in on a conspiracy, you shouldn't be surprised if they decide to confirm your paranoia by banding together against you. [1]

Especially among your fellow editors and peers, there really is no cabal. A cabal works in secret and avoids claiming responsibility. Battlestar Wiki's editors, as unlikeable and unfair as the ideas and actions of some may seem, cannot be accused of those failings. You can call those groups that are a little too cohesive and prominent for your taste a faction or an oligarchy, if you're into politics, or you could consider the possibility that they're only human, and have a tendency to stick together when confronted with hostility towards all of them. But if there is a cabal, only a conspiracy theory could confirm its existence.

Extreme Unction's first law: If enough people act independently towards the same goal, the end result is indistinguishable from a conspiracy.

It's much more productive to refute the arguments of the majority than implying they are wrong because it is the majority, or implying you are being repressed because it doesn't agree with you. If you attack people who oppose you as if they were a collective with an agenda against you, then whether they were or not, they will certainly become one. There is no cabal conspiring against you surrounding this or that article — unless you created it.

It is the overwhelming sentiment of the users at Battlestar Wiki that normal business of the wiki is discussed and decided on the wiki's talk pages.