Audrey Landers (born July 18, 1956) is an American actress, singer, songwriter and producer. To television audiences, she is best known for her role as Afton Cooper in the 1980s series Dallas, as well as various appearances in series from the late 1970s to the 1980s, including Battlestar Galactica.

Her younger sister, Judy Landers, is also a well-known actress who worked on Vega$ and the Glen Larson series B.J. and the Bear. Due to their close-knit nature, both Audrey and Judy Landers were often the combined focus of various news publication articles of the 1970s and 1980s, notably the January 1983 issue of Playboy magazine, a non-nude pictorial in which both Landers sisters appear in lingerie.

Born in Philadelphia, Pennsylvania, Landers and her sister Judy were raised solely by their mother, Ruth, after their father "drifted away". Ruth Landers, a professional model at the time, subsequently relocated herself and her family to Rockland County, New York[1], where she introduced a three-year old Audrey to show business when Audrey would accompany her on modeling assignments. It was since this that Audrey Landers pushed her mother to take her to auditions, as well as subscribing to various trade publications to find auditions.[2]

At age 12, Landers assembled a demo tape of "The Apple Don't Fall Far From the Tree"[3], which Landers' wrote, and sent it to Merv Griffin. This demo tape landed her an appearance on The Merv Griffin Show and an agent[2], although her mother still retained her status as Landers' manager. The aforementioned song also became a well-played, popular Country/Western single, which began a career that would result in 10 gold singles, 4 gold albums, and 2 platinum albums. None of which have been officially released in the United States[3]

During her tenure at soaps, she participated in an accelerated program with advanced courses at Ramapo High School[1], where she maintained a straight-A average and graduated early, before the age of 17[5], despite the demands from both the soaps and schooling.[6] After graduating, Landers studied music composition at the Juilliard School in New York. She later majored in psychology at Columbia University, as well as earned a degree in pre-medicine.[3] Despite this, she found that she was happier performing.[2] Between both daytime dramas, which were filmed in New York, she took the summer off in 1973 for nearly four months to guest star on various television series[5], including Emergency! (which starred fellow BSG guest star, Randolph Mantooth) and Marcus Welby, M.D..[4]

After completing Somerset in 1976, she moved to Los Angeles, California, and continued her guest starring career, which included Police Woman, Happy Days, Battlestar Galactica (as Miri in "The Young Lords"), and Charlie's Angels (which starred Cheryl Ladd).[5] On these appearances, she lamented that "[t]he parts I was getting were nice, but nothing heavy. I guess I was spoiled by the soaps, where I got to do every sort of dramatic scene imaginable."[6]

In 1981, while being managed by Stuart Ehrlich[1], she auditioned for the role of Afton Cooper on Dallas, which she later won in a competition that she recalled as being fierce. The role of Afton Cooper was originally a two-episode guest starring role, which was upgraded to a recurring role after she completed her first episode on the series.[7] Despite her successful career at that point, she was propelled in the world spotlight due to this role,[5] which she wished to use to further her singing career.[8] It was Dallas that began her singing career in Europe, where she would travel back and forth between filming Dallas and performing in various shows.[5] During this time, she made various appearances on Fantasy Island, as well as The Love Boat along with her sister, Judy. Outside of acting, she pursued various interests, spanning from donating time to charities to writing poetry, as well as songwriting.[9]

During the seventh year of Dallas, she took a leave of absence[10] (which lasted until her character of Afton Cooper was re-written into the series for its last season in 1989[11]) to film Sir Richard Attenborough's A Chorus Line, which took over a year to film and starred Michael Douglas. For the movie, which fared better overseas than in the United States, she rigorously trained for the role, which Attenborough himself commented on in interviews. According to Landers, "He [Attenborough] always said in interviews that I wore out 2 dance coaches because I'd go in 3 hours before everybody came to work in the morning at 9 AM in the morning. Then I'd stay an additional 3 hours after everyone went home at night at 6 PM. So I had 6 hours of additional dance training a day." After training for months, the movie took five months to film, and was shot entirely in New York's Mark Hellinger Theatre.[5] 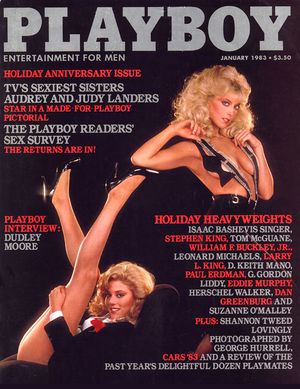 The Landers sisters appear in Playboy at the height of their fame.

In 1983, both Audrey and Judy Landers posed for Playboy magazine's January 1983 issue in a non-nude pictorial. Initially, Playboy approached the Landers sisters for a paid nude pictorial, but opted for a non-nude pictorial, as Audrey Landers explains: "It was really a coup for us. They offered to do a 'sister pictorial layout' for a tremendous amount of money – with nudity. But we told them we didn’t want to do that. So, instead, we ended up doing the photo session with no nudity and no money. We wanted to do something that was in the glamorous style of the 1940s that left a little to the imagination. At that time, there were only two or three women who had been on the cover of Playboy with a pictorial inside the magazine with no nudity."[2]

Additionally, Landers notes that: "We were basically playing very young roles. We thought it would make people take us more seriously as mature women and it didn't do anything. It didn't do anything good and it didn't do anything bad. We did have a bunch of people who hadn't seen the article offer us a slew of movies with nudity which we wouldn't do anyway. It certainly didn't hurt our careers. To this day I love it. I think it's a beautiful layout. I'm glad we did it. It's a nice piece of memorabilia."[5]

Prior to rejoining Dallas for its final season, she married Donald Berkowitz in 1988, after her mother introduced the two to each other in the mid 1980s. She and Berkowitz, who worked out of New Jersey in a paper distribution company, later had two twin boys via in vitro fertilization, Adam and Daniel[12].

After Dallas ended in 1989, Landers worked with her sister, Judy, and her mother, Ruth, in producing, creating and acting in made-for-television movies, such as 1989's Ghost Writer and 1991's California Casanova, both produced by Landers' production company.[5] After a short stint on One Life to Live from 1990 to 1991, in which Landers had a hand in creating the character of Charlotte Hesser[13], Landers and her fellow family members would write and produce The Huggabug Club[14], an award winning children's series on PBS, which starred both Audrey and Judy Landers, as well as Judy Landers' two daughters, Lindsey and Kristy Landers. The series ran from 1995 to 2001.

In 2007, Landers appeared on the USA series Burn Notice for a three episode stint as Veronica.