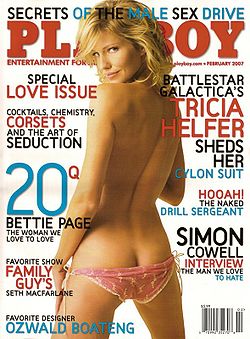 The February 2007 Issue of Playboy

Playboy Magazine, February 2007 issue features Tricia Helfer (Number Six) in a 16-photo spread. The shots were done in Acapulco, Mexico. So far, she is the only member of the Re-imagined Series cast and Galactica Sagas to do a nude photo spread for Playboy or any other magazine. However, Audrey Landers (Miri) was the first cast member of the Galactica Sagas to do a spread, but it was non-nude. Lucy Lawless (Number Three) did an interview for Playboy in the May 1997 issue about her role as Xena. The closest any other Galactica actor has come to doing the type of spread Helfer did for Playboy was Grace Park, who appeared in a lingerie photo shoot for Maxim magazine in 2005.