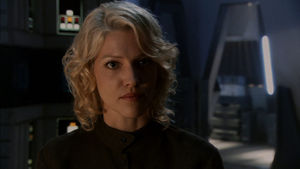 Six physically arrives on the Galactica and accuses Baltar of treachery

This is potentially the most powerful story yet to come out of the BSG fold, and James Callis – with due respect to Edward James Olmos – establishes himself as one of the prime reasons to watch the show. This is his episode, and he proves that he is not only every inch Olmos’ equal – albeit through vastly different means – but that his long shadow very much leaves the rest of the cast in darkness.

From start to finish, even knowing that ultimately, Baltar’s ego and sexual moirés did lead to the downfall of Colonial civilisation - that he is essentially a traitor, however unwittingly, one cannot help but root for his safe passage through the episode. Confidence, arrogance, pathos, fear, desperation, relief, confusion, hope, anger, disbelief – such is the range of emotions demonstrated by Baltar in this segment; some of them occurring so rapidly one after the other, that Callis seems to express them simultaneously.

As Six states during the epilogue, this is Baltar’s trial by fire – and the repercussions could be felt for some time to come. Who would dare accuse him of treason now? Even if her doubt – her gut instinct – is genuine, Roslin is going to have a hard time assailing Baltar’s new-found confidence and belief in himself. Adama is also caught between a rock and a hard place; any denial of resources for Baltar’s research could easily lead to he who was once branded traitor to make that claim of others in the name of protecting them all. In making his situation a matter of public debate, Roslin has potentially saddled herself with a new hero – as the standing ovation Baltar received from the press corps tends to demonstrate – and a potentially new political power. With elections only a few months off, and Tom Zarek’s return to the public stage mere weeks away (real time, in “Colonial Day”), Roslin may yet rue the day she made her uncharacteristic – and unwarranted, in some respects – personal attack on Baltar while he was in the brig.

"Shelly Godfrey" herself is the clearest indication yet that Baltar's Six is not only an implant in Baltar's head - but that "she" is in direct contact with other Cylons scattered within the fleet, and they are working in concert with one another in order to fully subvert Baltar to their will. Why?

The idea that "Shelly Godfrey" is a humano-Cylon working to genuinely trying prevent Baltar finalising his Cylon detector would make her arrival on the Galactica at the precise moment Six vanishes from Baltar’s head pushes coincidence to the limits of credibility.

Plus – if “Shelly Godfrey” was an attempt to stop the Cylon detector being completed, why was her evidence so clearly falsified? As Gaeta himself states: “Once the photos were fully resolved, it was almost too easy, like she wanted to be found out.” If “photographic evidence” can be manufactured by the Cylons, why not go for something that would genuinely condemn Baltar and which would be next to impossible for him to honestly deny: evidence that he allowed his Command Navigation Program to be tampered with?

No, the entire aim of "Shelly Godfrey's" arrival on the Galactica is to bring Baltar to that point in his life where his only salvation is to seek God's forgiveness and allow "Him" into his life. This is why her arrival is preceded by Six "vanishing" from Baltar's mind - thus leaving him without any form of inner support; and why "Shelly Godfrey" apparently "disappears" from the Galactica almost as soon as Baltar begs for God's forgiveness.

Taken together, these events all point to the fact that Six and her corporeal "sister" ("Godfrey") are in contact with one another. The Cylons within the fleet know that they cannot prevent Baltar from developing his detector indefinitely. Doing so would cause him to lose far too much credibility with Adama and Roslin - and possibly result in them assigning the work to someone else to complete. Better to have the device in the hands of a man they can influence.

This is why Six reacted with such anger when Baltar attempted to withdraw from the work when pressed by Adama (Bastille Day) - and gave him just enough clues for him to realise how his detector might work. Now, with the detector nearing completion, the Cylons must control its use - and the best way to control its use is to control the man responsible for it.

Thus, the entire episode is engineered to achieve the two goals they desire: Baltar is moved closer to their influence through his acceptance of "God", and they ensure he can be manipulated and managed where the detector itself is concerned.

So, if this is the case - and Baltar's Six is indeed in contact with her corporeal "sister" (and possibly other humano-Cylons in the fleet) what does it mean for the the series? The most obvious answer to this question is that the Cylons are clearly in control of events, whether or not they are precisely aware of the fleet's location. They are in a position to manipulate individuals and events within the fleet, and thus move things towards the ultimate goal of their plan.

Thus, Six Degrees of Separation - as in the "game" upon which it is based - begins to map the lines that interconnect the various elements of the story. And the idea of interconnectedness is exemplified elsewhere in the segment – most noticeably around Valerii / Boomer. And on Caprica, the interconnectedness is entirely physical as she and Helo pretty much get it on – thus passing another milestone in the Cylon’s plan - pointing the finger ever more clearly towards the subjects of procreation and love.

On Galactica, Boomer’s interconnectedness with other Cylons is palpably demonstrated in her reactions to the captured Raider. Watching the sensual response she exhibits as she touches and describes the Raider, one cannot help but wonder how much longer she can be treated without considerable suspicion. The events of Water, her involvement in events surrounding Litmus - Tyrol at the very least must be more than a little concerned at what she might actually be; indeed, going on the spooked look he gives her as she comes close to foreplay with the Raider, he must be questioning her sanity, if nothing else.

What is interesting in these two story elements is they way they mesh together while effectively moving in opposite directions: as Valerii on Caprica moves towards fulfilment of her mission with Helo, possibly achieving more than her original creation / formation could have aspired to – a human / Cylon relationship born of love and respect, rather than of lust and ego, as was the case with Baltar / Six; Boomer on Galactica is beginning to spiral out of control: she has had at least one “black out” that she knows of, in which Galactica’s water supply was crippled; she’s almost blown herself up; she’s been accused of collusion with the Cylons; she’s broken up with her lover, come close to a near-orgasmic experience with a Cylon device – and now someone is accusing her directly of being a Cylon. Contrast the way in which Valerii’s coupling with Helo on Caprica played out against Boomer’s desperation in her bunk room – a very powerful counterpoint.

One other character is worthy of mention in this episode – Alessandro Juliani (Lieutenant Gaeta). So far he’s had little chance to shine, but in this episode, shine he does, providing exactly the right amount of emotional support for Baltar – while also providing us with one of the most subtle moments of humour witnessed in television. The scene in the lavatory must be watched to be appreciated – especially Gaeta’s feet, which speak more clearly than any of the whispered conversation shared with Baltar, and the results are a joy to watch – as is the continued conversation with the camera peeking into each of the cubicles.

Overall, a cleverly-constructed episode that is as entertaining as it is intriguing, thanks to the aforementioned lavatory scene between Baltar and Gaeta, which loses none of its power with repeated watching.

Baltar to Adama, confronting the accusation that he may be a traitor

Baltar: And I don’t like being accused of participating in the genocide of the human race based solely on the word of a woman whom I have already indicated to you may well be a Cylon agent...I did not conspire with the Cylons. I’m an innocent man who is being convicted in the court of public opinion without trial.

Kara's Recovery in the Sick Bay

Kara Thrace is about to start walking after recovering from her knee injury, sustained in "You Can't Go Home Again". Doctor Cottle and Lee Adama are present.

Lee: C'mon Starbuck, you can do it.
(Kara gets out of bed, using it as a support.)
Lee (mockingly): Ah, that smarts. (walks over to Kara on crutches) That smarts. But I. Don't. Care.
Kara: You don't care?
Lee: I don't care. Because your pain is my entertainment. (hands crutches over to Kara) Your Crutches of Death, sir. Use them wisely.
Kara: Shut up.
Doctor Cottle: It's going to hurt like hell, but it's supposed to.
Kara: (wryly) Thanks doc.
(Kara starts out, slowly)
Lee: No pain, no gain. No cliche left unturned as, as Kara Thrace returns to the world of the walking. Can she do it or will she fall on her ass?
Kara: I swear to the Gods that I'm going to beat the crap out of both of you as soon as I get better... (pauses, retreats) No, I can't.
Lee: Yes you can. You did it.
Kara: No I can't. I can't. I can't.
Cottle: You're not going to get better lying on your back.
Kara: (getting on the bed) Oh, frak off.
Lee: We'll just take a break for five minutes.
Kara: I don't want to do it again. I want a pill. Now. Please.
Cottle: Sorry, but we're weaning you off the magic pills starting today. Besides, I need them for myself. (ambles off)