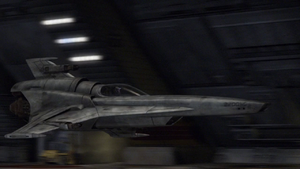 Viper 2200 moments before being crushed beneath an unusual Raider (TRS: "Razor").

Viper 2200NC is a Viper Mk VII flown by Captain Kara "Starbuck" Thrace during a mission to investigate an overdue science team that was studying a supernova remnant.

While on patrol with Captain Marcia Case in Viper 24, they are attacked by a group of First Cylon War-era Raiders. Though they are successful in making it back to the Pegasus (TRS), 2200 is forced to make a belly landing and its nose is crushed under Raider debris (TRS: "Razor"). 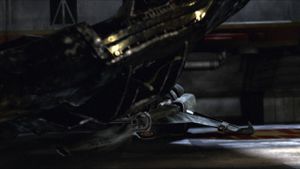