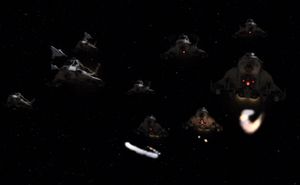 Snowbird Squadron is a wireless callsign for a Raptor squadron during flight maneuvers.

Lead by Lieutenant Margaret "Racetrack" Edmondson, as Snowbird One, the Raptors test deployment of decoy drones meant to emulate a battlestar reading on Cylon DRADIS.

During training run 16, the Snowbirds' decoy drone deployment is FUBARed by the less able Raptor pilots, such as those aboard Snowbird Four, whose drones almost impact with Snowbird One. Captain Louanne "Kat" Katraine scrubs the run due to this (TRS: "Occupation").

The tactics by this squadron would later be successfully deployed during the Battle of New Caprica (TRS: "Exodus, Part II").