Much of the information on this page was derived from the Wikipedia article on artificial gravity. 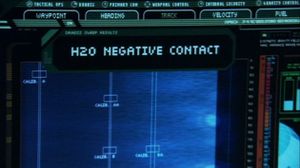 Throwaway graphics in the upper right corner of this computer display shows terms relating to the artificial gravity in a Raptor.

While the use of artificial gravity in the Re-imagined Series is obvious, there are only two explicit references. One is from the few close-ups of computer displays, where the terms "gravity control" and "synthetic gravity" are shown (upper right corner of the picture to the right). The second is Margaret Edmondson mentioning that the "grav field" is deactivated when she boards a drifting Raptor in the episode "Sine Qua Non."

This motion would push objects and people in the ship outward, so the outside skin of the ship would act as the "floor." This was done in the movie 2001: A Space Odyssey (the crew compartment inside the Discovery spun) and the TV show Babylon 5 (the cylindrical space station spun on its longitudinal axis). One of the Fleet's ships in fact sometimes uses this form of artificial gravity: the Space Park. Viewers can get a good view of this ship in motion when the Fleet leaves Ragnar Anchorage in the Miniseries. It's specified that the ship's design dates from a period when centrifugal force was the main artificial-gravity solution in place, before whatever current technology is in use came into widespread use.

Same principle that every astronaut experiences as their rocket launches into space and accelerates. This of course means that the ship must get progressively faster for eternity; stabilizing speed would lead to weightlessness, and stopping the ship would send everyone crashing into the ceiling.

This isn't artificial gravity, but the real thing. But there is the matter of the energies required to move your ship, the large gravity well that wants to attract other objects into your ship's general direction, and the shape of your ship. Gravity just works, pulling from every direction, so you would need a round ship to keep from strange changes in gravity aboard a ship. Worst of all, the amount of fuel needed to move a ship with a local mass concentration would be very high.

Stretch a tether with a small mass between a large gravity source and the ship you want. Cheap, fuel-free, and reliable. There's the matter of actually being able to travel somewhere besides planetary orbit without losing gravity, however. Several ships from the science-fiction role-playing game series Xenosaga, particularly the vessels Durandal and Dämmerung, appear to use a concept similar to this with masses rotating around the ship in a controlled orbit maintained by forcefields.

The term for this is diamagnetism. Based on the technologies we've seen in the Re-imagined Series (such as their use of magnetism for landing and launching Vipers)[1], this principle has the most viability, but is also fraught with huge problems in application.
Everything has a magnetic attraction, but most objects (a human body included) have very little of it. Diamagnetism at the present time has mostly been used to repel two objects, i.e. to levitate one of them, instead of to attract them, as gravity would.[2]. Also, high magnetic field concentrations are probably not very healthy in the long term.[3]

However, these methods, although proven in practice or at least mathematically, are not likely to be the solution implemented in the series. Other possibilities do exist that could more completely match the solutions used in the show, but are based less in current scientific understanding and more on imaginary technology, including:

Artificial gravity, or cancellation of gravity, is sometimes present in spacecraft that are neither rotating nor accelerating. At present, there is no confirmed technique that can produce gravity other than sheer mass. There have been many claims over the years of such a device. Eugene Podkletnov, a Russian engineer, has claimed since the early 1990s to have made such a device consisting of a spinning superconductor producing a powerful gravitomagnetic field, but there has been no verification or even negative results from third parties. In 2006, a research group funded by ESA claimed to have created a similar device that demonstrated positive results for the production of gravitomagnetism, although it produced only 100 millionths of a g[1].

The eponymous spaceship in the TV show Andromeda uses "gravity generators." The Star Trek universe has a similar concept. This has no context in the realistic SF ethos and no basis in scientific plausibilty at present.

The ability to do Faster Than Light travel indicates the Colonials have the advanced technology to manipulate spacetime. The same principles that enable this technology could be used to create gravitational effects on Colonial ships. While such technology is currently as far-flung as the aforementioned force fields and FTL drives, the concept may be arguably the most plausible as the actual solution as its correlation to FTL in the series has roots in general relativity.

So far the concept of artificial gravity in the show has yet to be explained; As much about gravity is still unknown, however, this would be in keeping with the show's naturalistic sci-fi aesthetic.

What about the flight pods on Pegasus?

Unlike Galactica's, each flight pod on the advanced battlestar Pegasus are divided along its length into two landing bays. In "The Captain's Hand", Vipers are flying inverted (relative to the battlestar) and land in the bays "upside down." Is artificial gravity to be credited with this?

The answer is more likely magnetism. Vipers are launched with a magnetic catapult, and (as seen in "The Hand of God") can magnetically mate using their landing skids to a metal surface (in this case, the interior of a freighter). Like gravity, magnetism works in any direction, and takes little to maintain. Confirming this idea is a scene from the Miniseries. As Colonial Heavy 798 lands in Galactica's port flight pod to offload passengers for the decommissioning ceremony, two spacesuited figures are working on the deck. The two crewmembers are floating, suggesting that artificial gravity is not in use. Reinforcing this are the combat landings done by Vipers. The fighters bounce very noticeably at high speeds but, unlike a rock skipping across a pond, the Viper bounces less ballistically, suggesting that a weaker force than normal gravity is at work. How the Vipers get from the upside-down flight deck to the right-side-up hangar deck, however, is unknown.